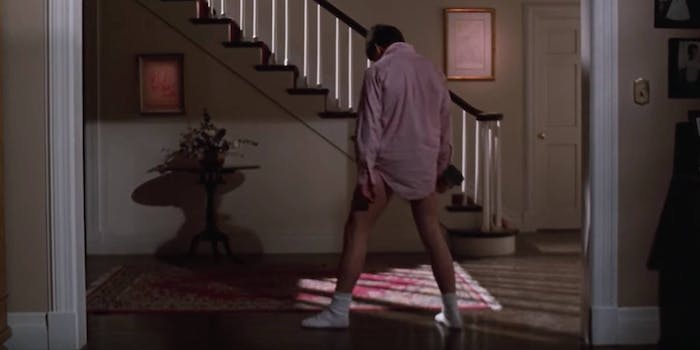 That lack of music just soothes the soul.

Remember the movie Risky Business? Cool. Me too.

What about its iconic dance scene, in which ancient high school doofus Tom Cruise tells pants to fuck off and blasts his parents’ pricey stereo system after getting confused by a TV dinner?

The inspiring protagonist, who is hellbent on hiring a sex worker, pleasures himself in a different way as “Old Time Rock and Roll” blasts throughout the house. It’s all really fun. But would probably be way more fun if you could actually hear Cruise derping around.

Enter Mix Minus, a sound design duo hellbent on destroying the most epic music scenes in movies by taking out their essential ingredient: music. They give the best scene in Risky Business the cruel treatment it deserves while simultaneously making you wonder just how old Cruise was when he played a high schooler bound for Princeton.

Mix Minus has given the silent treatment to the likes of Footloose, Rocky, and Grease. If you can get through all 65 cringe-worthy seconds of Cruise throwing out his neck and back in suburban Chicago, you can probably get through anything.