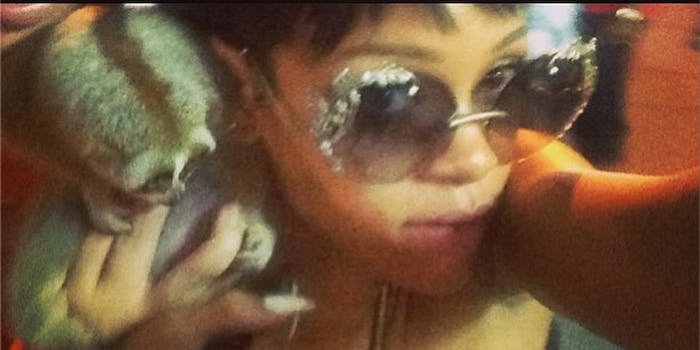 The Rihanna selfie that prompted a criminal investigation

“Look who was talking dirty to me," the pop star tweeted on Friday.

“Look who was talking dirty to me!” Rihanna tweeted Friday from the island of Phuket off the coast of Thailand, where she was taking a break from her current world tour.

It turned out to be a slow loris, a cute, bug-eyed creature that’s native to Southeast Asia. It’s also a protected species. And local police did, in fact, look into the matter.

“Phuket authorities were alerted to the picture (of Rihanna), and last night police arrested the two individuals who brought out the loris as a photo opportunity for tourists,” Weera Kerdsirimongkon, a Phuket district chief, told the Associated Press on Sunday.

The authorities rescued two lorises from the two individuals arrested, identified by the AP as a 20-year-old man and a 16-year-old boy. If charged with possession of protected animals, the two could face up to four years in prison.

But that’s not even close to the craziest thing Rihanna overshared during her visit. Aside from handfeeding some elephants, the controversial R&B star livetweeted a sex show that’s will make you hurl into cupped hands over your keyboard.

Either I was phuck wasted lastnight, or I saw a Thai woman pull a live bird,2 turtles,razors,shoot darts and ping pong, all out of her pu$$y

And THEN she tried to turn water into coke in her $!! Uhh yea, all I’m saying is water went in and soda came out! I’m traumatized!!!