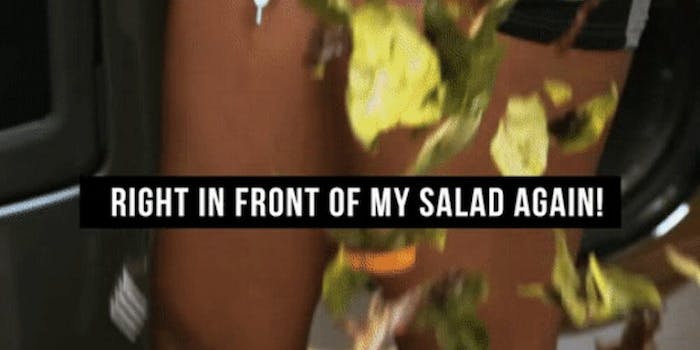 This time, Nikki is making a special salad for her man while he gets an in-home massage, and she walks past the room to find Jaxton is at it again. Screwing another dude… right in front of her salad. The salad, which was so damn good, hits the floor. Oops.

Not again! Y’all, did you even see how much work she put into that special salad?

There’s also a GoFundMe! It’s not clear what it’s for, and it hasn’t raised much yet, but it exists! It’s always a tough business to be the star of a meme: you want to replicate your success, but you can’t force a repeat of something that happened organically. At best, you’re Sharknado, an acutely self-aware series that grows intentionally more absurd with every installment. That’s what “Not In Front of My Salad” should be, but with hot man-on-man-in-front-of-salad action instead of sharks and … ‘nados.