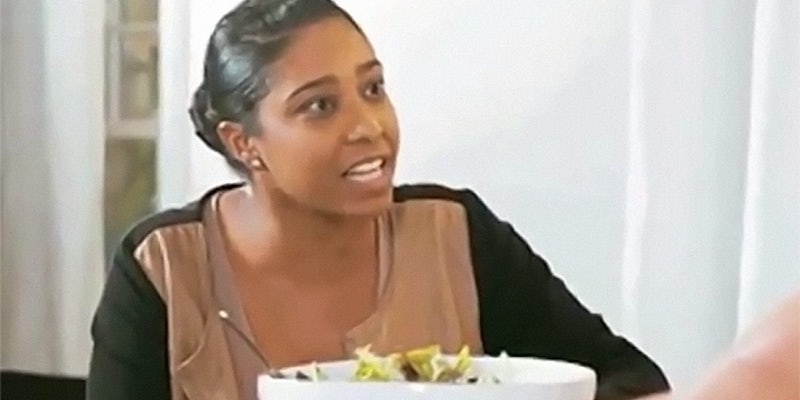 Who is the salad queen?

In the preposterous plot of the scene, a husband had hired a chef to make his wife a special salad, and then he banged the chef in their kitchen. “Are you serious?! Right in front of my salad?” she said. The line is now iconic, but who’s the actress?

She’s a professional model who goes by Nikki V., and claims credits on BET and in Esquire. Nikki is well aware she’s becoming internet famous, and she seems to be having fun with it.

“I have been getting a lot of interviews and my following has been going up,” she told the Daily Dot. “I love it because people are so funny and positive. It’s a great thing.”

“Everyone is calling me an icon and a salad queen,” she wrote on Instagram, “I am so thankful i’ve been laughing at some of the things people have been sending me. can’t wait see what my next scene is going to look like…”

It seems we can look forward to seeing more of Nikki on men.com. She added the hashtags #men and #yesiamgoingback.

Nikki told the Daily Dot she knew exactly what she was getting into when she signed up for the salad scene.

“I submitted to the gig on craigslist and they replied back to me. I wasn’t shocked or anything because the ad was very clear about what they were looking for,” she said via email.

In fact, it seems like Nikki knew her line was going to be famous more than a month before the video came out. She posted a photo of a salad on Instagram June 5 and captioned it… “#rightinfrontofmysalad.”