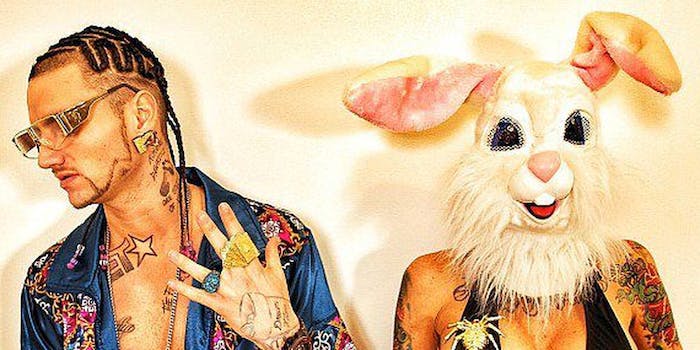 Bizarro hip hop star Riff Raff will take you to prom for only $28,000

Make it a night to remember.

Let’s face it: Thanks to all the cultural build-up surrounding the event, prom is usually a pretty big letdown.

Sure, you get to dress up in a rented tuxedo or a hideous (in retrospect) dress, but prom still consists of simply hanging out in a room with everyone from your algebra class while your physics teacher stands by the door giving the evil eye to anyone who looks like they’re legitimately having fun.

How do you spice things up? Do you spike the punch bowl with rum stolen from your parents’ liquor cabinet? Do you murder all of your tormentors with your uncontrollable psychic powers? Nothing so crass. All you need to do is show up with absurdist hip-hop star Riff Raff on your arm.

The heavily tattooed white Houston rapper with the razor-sharp grill recently posted a once-in-a-lifetime offer on his Instagram. For the low, low price of just $28,000, Riff Raff will accompany you to your high-school prom, with all the accoutrements necessary to go out on a date with the self-described “rap game Bon Jovi.”

Even though the rapper is 32 years old, the date won’t be creepy, because anyone taking advantage of the Riff Raff escort service has to be at least 18 years old to be eligible in the first place. See, not creepy at all.

If the name Riff Raff doesn’t ring a bell, think of the character that James Franco played in Spring Breakers. That role was largely modeled off of Riff Raff’s real-life persona. Seriously, prom is going to be great.

In case the whole professional-prom-date thing doesn’t pan out, Riff Raff is working on another back-up career. TMZ reports that the rapper is training with wrestling legend Hulk Hogan to become a professional wrestler in the WWE.

As he said in the song “Versace Python”: “When I wake up, it’s a mystery/ Every time I open my mouth, history.”