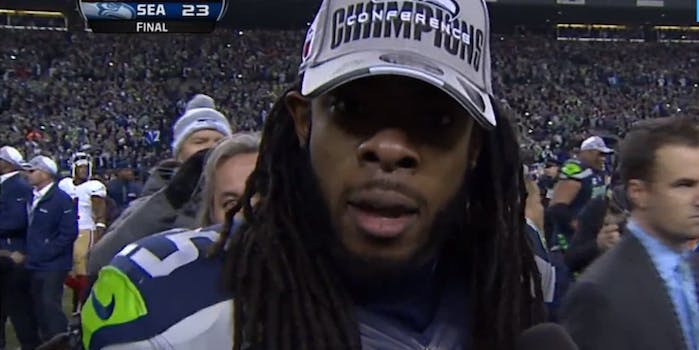 This is the reason why your parents will be rooting for the Denver Broncos in the Super Bowl.

After making the defining defense play of the heated playoff game between the Seattle Seahawks and the San Francisco 49ers, cornerback Richard Sherman not only picked up a penalty for taunting the 49ers’ Michael Crabtree, but he followed it up with a heel-turn with sideline correspondent Erin Andrews. It’s going to live in infamy, right up there with Allen Iverson’s “Practice” interview.

In short, this is the reason why your parents will be rooting for the Denver Broncos in the Super Bowl, and why I can finally commit to the Seahawks.

The embarrassment doesn’t end there for Crabtree. Adding insult to insult, shortly after the game, his Wikipedia page was updated with a summary that referred to him as “the sorriest receiver in the National Football League.”

Back to you, Joe.