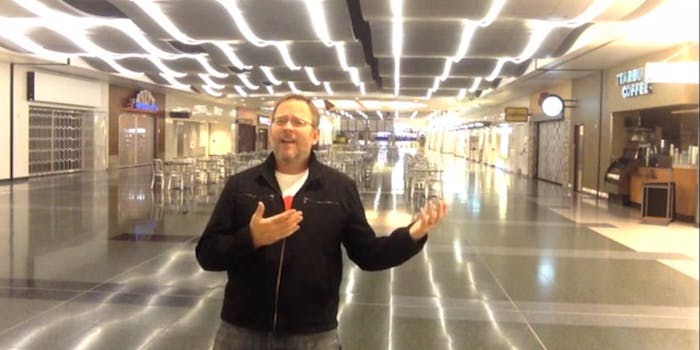 Well, that’s one way to kill a few hours in the airport.

Richard Dunn found himself stuck at the McCarran International Airport in Las Vegas overnight after he accepted vouchers to be bumped off two Delta Airlines flights. So instead of reading or trying to get some sleep, he decided to make a video about being alone with some help from a Canadian superstar.

“I thought, well I don’t have enough time to go to a hotel so what do I do?” he told the CBC. “I’ve got my phone and an empty movie set, let’s see what trouble I can get into.”

The end result is a hilarious ode to Celine Dion, complete with some clever shots with help from a ruler and a moving escalator. We might not have been stuck in an airport all night like Dunn, but now we have an idea of how to spend it if we ever are.

And let’s face it. The airport staff has probably seen weirder things.