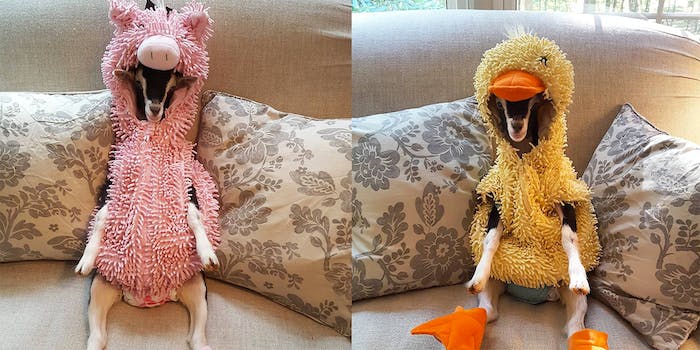 Who knew cosplay could be so chill?

The Goats of Anarchy rescue facility in New Jersey is doing fantastic things for baby goats with special needs. Its sprawling wooded lot includes a massive barn and playground for the animals. Oh, and copious costumes for one such anxious goat named Polly.

Oh Polly, you quack me up! pic.twitter.com/ocrGKEwDGQ

Owner Leanne Lauricella told the Dodo she first purchased the above children’s costume at Marshalls thinking it would look adorable on her newest rescue, Polly. Little did Lauricella know the anxious goat would find all the comforts of a spa, meditation, and a lazy day at the beach wrapped up in this fowl costume.

“As soon as I put [the duck costume] on her, she just instantly got calm,” Lauricella tells the Dodo. “I tried a ThunderShirt—it didn’t work. There’s something about that duck costume that calms her. She goes into a little trance. She just closes her eyes and she’s out.”

Though the duck costume is undoubtedly Polly’s favorite, she’s also taken to a pig costume and a fox costume, among many other outfits. Playing dress up is perhaps the goat’s favorite form of relaxation.

Polly is a sweat pea 🌱 pic.twitter.com/dhihWrxzsG

According to the Dodo, Polly has quite a few medical issues, including neurological problems outside of her anxiety issues. She’s also blind and underweight. Lauricella and Goats of Anarchy have provided Polly with a safe, comfortable space to enjoy life like she never has before.

Polly’s even got a new friend named Pocket! The two are inseparable, and Pocket’s calming presence is just as soothing as the duck costume she may outgrow.

Those interested in helping Polly, Pocket, and the many other goats at Goats of Anarchy can head to Lauricella’s GoFundMe page for the rescue center.