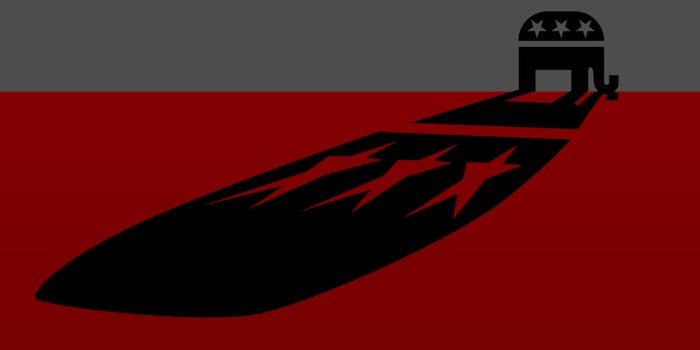 The most powerful weapon the GOP has is your uninformed terror.

The Republican Party has long been favored to win the U.S. Senate in the midterm elections taking place next Tuesday. The party’s old, white base may look less and less like America with each passing year, but those voters continue to turn out in much larger numbers than the members of the Democratic Party’s diverse coalition. What is often lost in the discussion about this midterm turnout advantage, however, is the fact that it is the product of conservative fear and anxiety—specifically, concerns about immigration and the increasingly diverse American population. Republicans are highly motivated to vote in midterms because they are terrified of where they see their country headed, and politicians are all too happy to exploit this fear as it pertains to immigration, seizing upon cultural anxieties about Ebola and ISIS to whip voters to the polls.

The Republican Party has relied on a political strategy based on fear mongering ever since the election of Barack Obama (remember 2010’s “death panels“?), but in the 2014 midterms, the party has leaned harder on the strategy than ever before. The world today offers Republicans an unusually compelling panoply of dangers and fears to dangle over voters. The result has been a campaign approach that’s straight out of the Halloween season. On issues like Ebola and ISIS, right-wing candidates and their supporters have shamelessly exploited conservative fears about “The Other,” peddling dubious claims, hyping fears beyond reasonable levels, and deploying nativist arguments to work the Republican base into a lather.

Witness the conservative hysteria about Islamic State of Iraq and Syria (ISIS) terrorists crossing into America. ISIS border-crossing stories play on two key narratives: Democrats aren’t keeping you safe from terrorism and there are bad people crossing our border who need to be kicked out. The former argument led to a quixotic decade-long military adventure in Iraq, while the latter gave birth to the Minutemen, the gangs of conservative volunteers patrolling the border looking for non-white people to shoot.

Conservatives have criticized President Obama for refusing to bomb ISIS more intensely—and House Speaker John Boehner wants an invasion—but these broad foreign-policy arguments don’t resonate well enough with base voters. They needed an argument that, once internalized, would connect the threat of ISIS more intimately to Americans. Republicans found their opening in the ongoing immigration debate.

Immigration is the linchpin of modern conservative nativist anxiety and the fear of Them coming to live among Us. When you mix a supposedly porous border with a terrorist group unlike anything we’ve ever seen before, you get a recipe for nativist catnip. Why complain about immigrants stealing jobs when you can do it about immigrants blowing up suburban McDonald’s?

If the GOP’s midterm advantage is the result of conservative fear, then that fear is the result of the conservative media diet. Unlike liberals, who get their news from a wide variety of sources, conservatives “are tightly clustered around a single news source” (Fox News) and “express greater distrust than trust” of most mainstream sources, according to a report from the Pew Research Center. Republican base voters rely on their limited array of media outlets because these sources filter the news through reassuring prisms: racial, sexual, and cultural anxiety related to the evolving and diversifying character of the modern United States.

An NBC News/Wall Street Journal poll released in September found that 47 percent of Americans thought that the United States was less safe than before the September 11, 2001, terrorist attacks. It is in this climate of widespread anxiety that conservative politicians have taken advantage of the perceived, but erroneous, threat that ISIS poses to the United States. In mid-September, Rep. Trent Franks (R-Ariz.), told a radio host, “It is true, that we know that ISIS is present in Ciudad Juarez [Mexico] or they were within the last few weeks.” This, Franks said, was direct evidence that “they have designs on trying to come into Arizona.”

Franks’ statement was a bonafide “whoa if true” claim. The only problem was that, based on all available evidence, it was completely false. The most likely source for his claim was the factually-challenged right-wing website Judicial Watch, whose report the Department of Homeland Security dismissed, saying, “[w]e are aware of absolutely nothing credible to substantiate this claim.”

Republicans continue to beat the drums for stepped-up military engagement with ISIS, claiming that ISIS is close to striking inside America. Never mind the fact that Homeland Security Secretary Jeh Johnson said in September that the government has “no credible information” to substantiate such claims. You’re more likely to vote when you’re scared than when you’re feeling safe, and conservatives like Rep. Franks and former Rep. Allen West (R-Fla.) know this.

Meanwhile, the hottest news story right now is Ebola, and here too Republicans have used flawed reasoning and scare tactics to encourage worst-case-scenario thinking and foster a doomsday mentality. As with ISIS, Republicans link Ebola to the border, arguing, as New Hampshire Republican senatorial candidate Scott Brown did, that “we have a border that’s so porous that anyone can walk across it. I think it’s naive to think that people aren’t going to be walking through here who have those types of diseases and/or other types of intent, criminal or terrorist.”

Most of the other Republicans who have spoken up about Ebola have done so with a similarly dim understanding of the situation. “We don’t know what we don’t know about Ebola,” said Rep. Jeff Duncan (R-S.C.) during a radio interview in mid-October. “We think we know it’s a virus, but we don’t know, is it mutating? Can it be spread by airborne?”

“Can it be spread by airborne?” is both grammatically and intellectually representative of the Republican Party’s grasp of this genuinely worrisome public health situation.

To answer Rep. Duncan’s question, Ebola is unlikely to become an airborne virus. It isn’t impossible, because as Duncan correctly exclaims, we don’t know everything there is to know about Ebola. But as Columbia University virologist Vincent Racanciello points out, “[w]e have been studying viruses for over 100 years, and we’ve never seen a human virus change the way it is transmitted.”

Republicans’ favorite Ebola talking point right now is the idea of a travel ban. Although there are different travel ban proposals floating around, the basic idea would be to prevent people from infected countries from flying to the United States. (Australia implemented a similar measure on Tuesday.) The reason this appeals to conservative voters is because it blends their instinctive suspicions about people coming from a certain continent with their concerns about an Ebola pandemic. The ban sounds devilishly simple: just stop them from coming here until they get their Ebola problem under control.

However, here too conservatives suffer from a dearth of accurate information. Rep. Dennis Ross (R-Fla.), who has proposed a bill to implement a travel ban, epitomized the problem during an appearance on MSNBC’s Morning Joe on October 17.

“I believe we can nip this in the bud, if you will, at least by banning those flights temporarily,” Ross said.

Which flights? Ross didn’t specify. And in fact, as New York Times reporter and fellow Morning Joe guest Jeremy Peters pointed out to the congressman, “There are no direct flights that come to the United States from West Africa.”

Ross’ reply was sarcastic: “Then we don’t have any problem. Everybody’s contained, correct?”

Obviously, not everything is contained, and there is a problem. Ross had erected a straw-man argument, accusing travel-ban opponents of denying the existence of any public health issue.

The only accurate thing Ross said in the entire segment was that his proposed travel ban “will not solve the problem.”

Right-leaning media personalities have been trumpeting Ebola hysteria for weeks. Even the Wall Street Journal weighed in against “Ebola anti-hysteria hysteria.” Yet the simple fact is that public health experts oppose a travel ban. “Isolating countries won’t keep Ebola contained and away from American shores,” said Centers for Disease Control and Prevention (CDC) Director Tom Frieden. “Paradoxically, it will increase the risk that Ebola will spread in those countries and to other countries.”

Conservative fear mongering on Ebola and ISIS has its roots in anxieties about immigration more generally. Republicans are running midterm election campaign ads, like this one from Arkansas Senate hopeful Tom Cotton, accusing Democrats of supporting “citizenship for illegals” and “ignor[ing] the crisis” at the border. The pace of undocumented immigrants arriving in the U.S. may have slowed down in recent years, but for conservatives, even one unauthorized crossing is enough ammunition to stoke fears about a “surge” of illegal migration. (Even words like “surge” are inherently loaded, conveying the image of “ a dangerous flood of barbarian invaders.”)

The avatar of conservative immigration rhetoric is Rep. Steve King (R-Iowa), the political firebrand who once said that most of the young immigrants in the U.S. illegally are drug-smugglers with “calves the size of cantaloupes.” Unlike some Republicans, King is not content merely implying a link between immigrants and terrorists. Undocumented immigrants, he said at an Omaha, Neb., event, have killed “multiples of the victims of Sept. 11.”

King and others like him may be the laughingstock of the mainstream political world, but there’s no doubt that the choir he’s preaching to does exist. Encouraged by mistaken beliefs about everything from medical science to counterterrorism policy, conservative base voters are poised to carry the Republican Party into the majority in the U.S. Senate.

After presenting his dubious claim about the murderousness of undocumented immigrants, King asked the audience in Omaha, “Now, that hits home, doesn’t it?” Drug-smuggling, Ebola-carrying, ISIS-supporting immigrants may be too terrifying for even the scariest Halloween haunted house, but to conservative Americans anxious about the myriad ways in which their country is changing, it’s an image that definitely hits home, and it’s one that may just drive them to the polls on Tuesday.