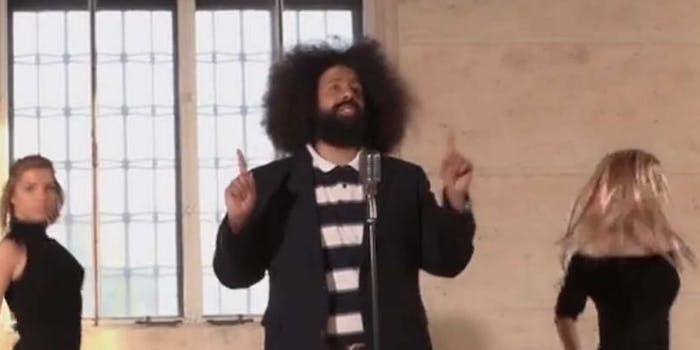 Reggie Watts wants to Rickroll you

The beatboxing, mad-soul genius just covered Rick Astley’s "Never Gonna Give You Up."

Want to see the latest trailer for the new season of Arrested Development?

To kick of YouTube’s Comedy Week, beatboxing mad-soul genius Reggie Watts appears in a music video that, while vastly different from his regular style, will still be familiar to almost everyone. After a majestic opening sequence, those instantly recognizable 1980s-style notes play and we see the familiar deserted ballroom.

Watts’ garbled, almost lyric-free version of Rick Astley’s “Never Gonna Give You Up” is accompanied by a shot-for-shot—and outfit-for-outfit—remake of the classic viral video. In addition to Watts, sketch comedian Jordan Peele is also seen in the video, acting as the infamous bartender.

YouTube commenters have mixed feelings about the comedian’s rendition of Rick Astley’s one-hit wonder, but TheMrmegayouknow put it best:

“This is? actually waaay better!”