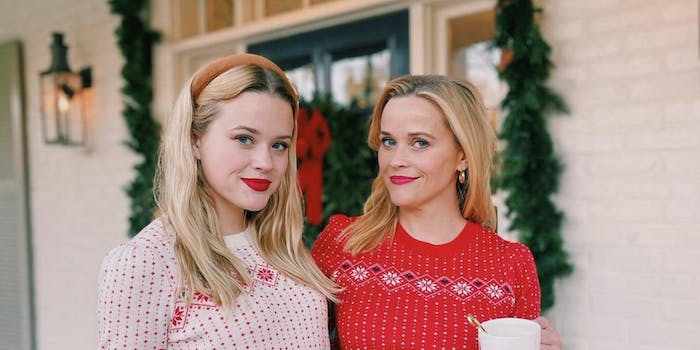 A new photo showed off their matching holiday sweaters.

The photo, which doubles as a plug for Draper James (aka the clothing line that Witherspoon founded), features Witherspoon and her daughter Ava Phillippe (with actor Ryan Phillippe) wearing matching sweaters—Witherspoon’s is red with pink snowflakes while Phillippe’s is pink with red snowflakes—and holding mugs to mark the holidays.

“Ok. It’s 💯 true that I had to beg her to wear a matching Holiday sweater…. but isn’t it CUTE??!! #humorme #itsamomthing🥰 @draperjames,” Witherspoon wrote.

But some people who might not frequent Witherspoon’s Instagram page or be familiar with Phillippe are just discovering how similarly mother and daughter look. As Scottie Beam summed it up on Twitter, “I know this is how genes work but wow.”

Beam is far from the only one who’s shocked by how much Witherspoon and her daughter look so much alike. Some of Witherspoon’s friends and colleagues (“I’m seeing double!” Padma Lakshmi commented.”) even noticed the similarities.

Another person pointed out the multigenerational and similarities to both parents.

If nothing else, Witherspoon and Phillippe are both in good company.