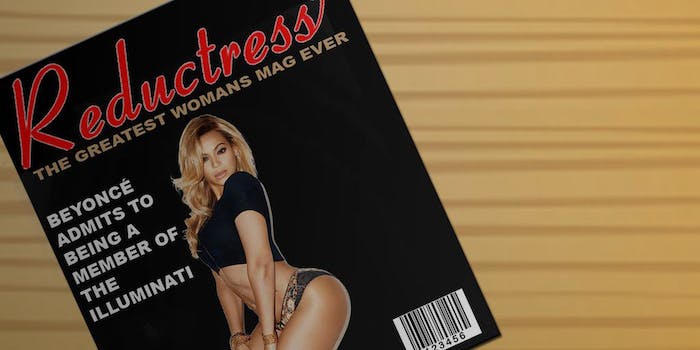 Meet the women behind Reductress, the feminist Onion

Women’s magazine headlines often read like parody, but Reductress.com blurs the line between satire and reality.

Women’s magazine headlines often read like parody, but in the case of the newly launched Reductress.com—the feminist equivalent of The Onion—the line between satire and reality is as thin as you’ll be with your new summer bod, girlfriend!

It’s a niche that’s so ripe for satire, and despite the influx of content geared toward female audiences, there hasn’t been much outspoken criticism of the way these “feminist” media empires scare and condescend to women. 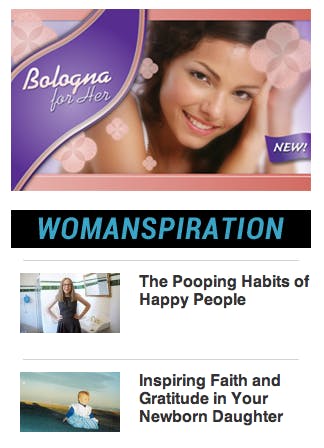 Founders Sarah Pappalardo and Beth Newell, both improv and sketch comedians, saw the space for Reductress because they’re religious consumers of women’s online media; Reductress, designed to look like any other “women’s” publication, is a clear play on magazines like Cosmopolitan and Shape and feminist websites like Jezebel and xoJane (disclosure: I’ve written for them).

Reductress is not only biting, “goes-there” hilarious, it’s a fantastic, sad, and much-needed look at the way the media talks down to women, convincing us we need products we don’t and playing on our every insecurity. (Need a boyfriend? Too fat? Not giving your fetus the jumpstart it needs to attend Harvard?)

My favorite headlines? Having witnessed a “Women in TV Writing” panel in which the host, a journalist for Entertainment Weekly, kept asking the women about their bangs rather than their very successful careers, I’d have to say the “Creator of ‘Rape in America’ Documentary Talks About Hair Care” headline is depressingly spot-on. How about “A Homemaker’s Guide to Maybe Thinking About Wanting to Have Sex?” Or “White Woman Speaks: I’m So Exhausted From Saving the Day All the Time.” Or “‘How to Not Get Raped’ Class a Big Hit in Indiana Town,” which includes this gem:

Instructor Michael Kearns, 54, says, “We tell these girls about the dangers of mixed signals. If you’re dating a bunch of jerks but then you won’t put out for a nice guy, the injustice of your behavior might drive the nice guy to desperate measures.

It also takes down the annoying habit companies have of slapping “For Her” on a product and calling it new. Remember Bic’s ill-fated “pens for women” campaign that was destroyed by witty feminist Amazon reviewers? Reductress introduces us to “Bologna for Her.” In satirizing the way we blame Taylor Swift for everything, the site accuses the pop star of destroying the space-time continuum and of breaking up the Beatles.

After reading through the site and laughing through my tears, I interviewed the ladies behind Reductress about the twisting of women’s media, the mixed messages of “beauty,” and making online content for women that isn’t about fear.

Daily Dot: What was the impetus for creating the site? One too many shitty headlines? One too many interviews where people ask Hillary Clinton about her outfit?

Sarah Pappalardo: There is so much content out there that is catered to women (the demographic) that is of questionable relevance to women (the actual human beings). The more we are engulfed in it, the harder it is to see just how absurd it is. Beyond the obvious criticisms people have about the beauty and fashion industry, there’s just a whole lot of other silly stuff out there that nobody was talking about.

Beth Newell: I worked on a couple of sketch comedy projects last year that involved women exclusively and I kept seeing the same themes pop up over and over again. When you get a group of women in a room (especially comedians) and talk about different women’s media, there’s a really strong consensus about what’s ridiculous about it. So over time I started to wonder why this wasn’t being parodied on a broad scale. You’d see a commercial spoof here and there, but nothing like we’re doing that I was aware of. There is such an encompassing tone to women’s media with so much material to be satirized, it’s kind of surprising someone hasn’t already done something like this. 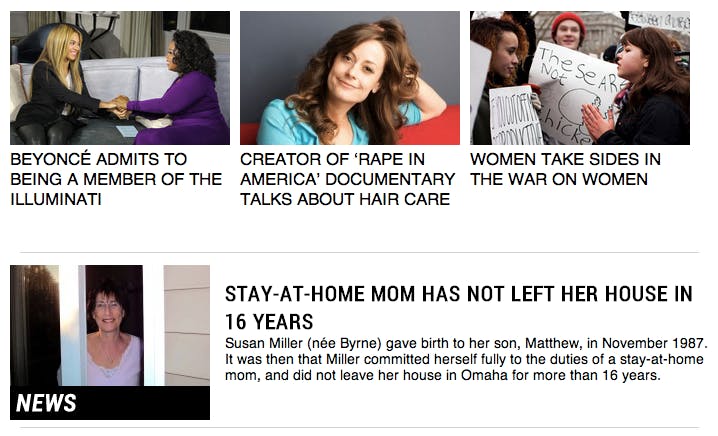 DD: Tell me a bit about each of your backstories. Are you comedians? Journalists? Web designers?

SP: A little bit of all three. I went to college in Chicago, where I performed improv and sketch comedy, and wrote a couple of plays. I am currently a freelance writer, and work at an interactive agency during the day. So, I’m pretty familiar with how comedy, websites, and interactive media are born. Reductress allows me to be neurotic about them all.

BN: I started studying and performing at UCB in 2005 and more recently have performed and taught at the Magnet Theater, where I’m the Managing Director of their sketch teams. I was a writing intern and later contributor at the Onion News Network a few years back, where I fell in love with their obsessive writing process. I also studied Illustration in college.

DD: What would you say, in your words, is the goal of the site? Right now, it reads like a spot-on feminist The Onion. Is the intent to keep it going like that?

SP: It’s wonderful to be compared to The Onion! We do want to move beyond a strict news format—taking on the women’s ‘inspirational’ blogosphere, the Kinfolk-inspired media, and the very idea of the “hip” New York media company itself. So, while there is an Onion-esque element to what we’re doing, we hope to more specifically satirize media directed toward women, and the industry itself.

BN: Well, the one main goal of the site is to be funny. We want to write things that make people laugh and help them get through their day jobs. Hopefully, we’re covering topics that women don’t get to see represented elsewhere in comedy. We want things to always ring true and to feel fresh and original, which I guess is the goal of most comedy.

DD: How will you keep the site going? Are you raising money?

SP: We will be Kickstarting soon to fund phase 2 development, at which point we will start seeking legitimate business models.

DD: What do you think are some of the worst offenses of online feminist/women’s “journalism” (if you even read those sites anymore)?

SP: We read them pretty religiously. Aside from the obvious body-image stuff that comes up in beauty and style magazines, I’m fascinated by the well-meaning, but completely contradictory messages that women are “beautiful no matter what,” but that “beauty lies on the inside.” We’re being fed completely different messages in the same tone, and people don’t seem to question it how weird that is.

BN: We know there’s pressure for the people who work at these publications and blogs to come up with sensational headlines to generate traffic and we’re really amused by the lengths they’ll go to in order to do that. One of the overriding themes we’re parodying is the pressure women’s media puts on women and girls to be a certain type of person or check a certain number of boxes to be a “real” woman. And different publications would define the qualifications differently, but you see a pressure on women to be a certain way, to a level that you don’t see in mainstream or men’s media. It feels as though most women’s media hasn’t caught up with the priorities of our generation.

Photo by Fernando Alfonso III for the Daily Dot