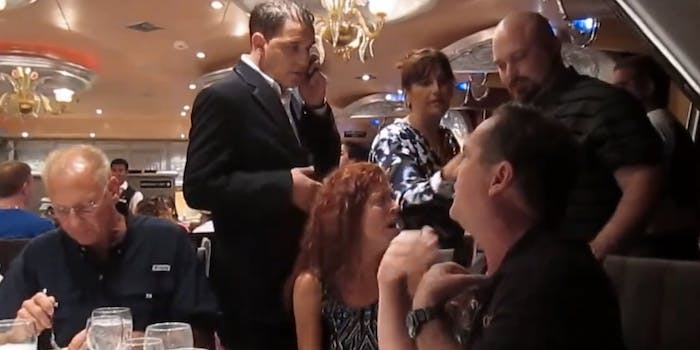 Sometimes attempting to shame someone through social media backfires, as one family is learning while their cruise ship altercation video gains traction on YouTube.

Here’s the story: Two families are on a cruise ship and seated next to each other at dinner all week. Family 1 has a crying baby, which annoys Family 2. Family 2 waits until the final meal of the cruise, complains to management, and films a fight between themselves and Family 1. People on both sides act classless and ridiculous, but in an attempt to further shame Family 1, Family 2 posts the whole video to YouTube, calling Family 1 rednecks.

Sure, watching two families shout at each other while trapped on a boat is quality entertainment, but the real joy is the banter in the video’s comments. Ray Bergeron, part of Family 1, has been replying to comments with defenses of his actions, even as YouTubers call him out for being rude in the video. In fact, several commenters said they couldn’t figure out who the “rednecks” in the video were supposed to be.

“I’m lost whos the rednecks the people video taping this or the people leaving???”

“Wow….   this was so funny…  I have watched the video twice trying to figure out who the rednecks were…  lol  I consider myself to be a good ole country redneck gal, but even us dumb ole stupid rednecks wouldn’t have behaved like that.  The folks sitting at the table were just as rude and the dude with the child.  Just an stupid ole redneck gals opinion.  ;-) ?”

Then, the father of Family 1, Christopher Doucette, found the video yesterday and offered his own explaination.

“As stated in this video the other tables never heard or had any problem with our table, but people from the take you sat at came to us to apologize for how rude you were and how they were embarrassed by your actions. Also other tables she the manager and servers where out rooms were to bring us our dinner because your felt entitled to have things your way or no way and ruined our last dinner on this cruise. Yes things were handled very wrong but make no mistake if someone were to make fun of or harass my child I’ll fight for them every time. There are two sides to every story and you have been able to play the role of abused……. that will happen no longer the truth is out now both sides are able to comment on the video.”

Other cruise attendees and family members have also joined in. As the squabbling goes on and on, neither side really looks good. Does a baby belong at a nighttime formal dining experience at sea? Probably not. Should you scream at a family over their crying infant and film the whole thing to shame them? Likewise, probably not. But when you opt for a vacation that leaves you trapped in the ocean with total strangers, you get what you deserve. We award the win in this feud to the “rednecks.”

Update 10:55am, Nov. 16: The video has been removed from YouTube for violating the site’s terms of service.