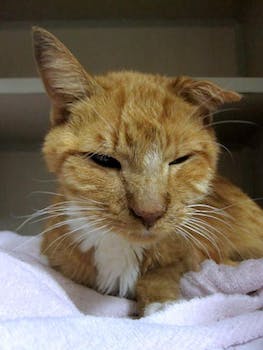 When a redditor found an abandoned cat, she jumped into action.

When redditor staplegunsarefun found a cat dying in a gutter, she thought his owners would be worried and grateful for the news. She thought wrong.

What followed was one cat-loving redditor’s saga to nurse this abandoned cat back to health.

Staplegunsarefun immediately brought the cat to City Kitties, a West Philadelphia volunteer cat rescue, for medical care. The animal, which she and the vets dubbed “Clark Kent,” was dealing with several neglect-related ailments.

“This is why I like cats, not people, she wrote. “But why do you microchip your cat if you clearly don’t care about him enough to want him back if he disappears.”

The small orange cat was in such bad shape that staplegunsarefun was worried he wouldn’t make it through the night. Luckily, this morning she posted a positive update on his condition, much to the relief of r/cats.

“After reading your update, I said “YES!” out loud,” commented redditor NeverClever80.

According to City Kitties’ blog post on Clark Kent’s story, people from all over the world were rooting for the cat’s speedy recovery. It’s likely that many donations came from the hundreds of people commenting on Clark’s r/cats post.

“The good news is that Clark Kent has supporters all over the world who are rooting for a speedy recovery. We want to thank the hundreds (yes, hundreds!) of people who have generously donated toward Clark Kent’s care from places as far-flung as Australia, Germany, Ireland, Canada, and 30 U.S. states from Florida to Hawaii,” they wrote.

City Kitties also plans to use some of the money to press charges against Clark’s former owners for animal abuse.

Thanks to this support, staplegunsarefun said she could rest easy about Clark’s future.

“I have a feeling that Clark is going to find a home quickly,” she said.