It's enough to give you the howling fantods.

In the 19 years since it was published, David Foster Wallace‘s Infinite Jest has gained the sort of cult status that a struggling novelist would kill for. And perhaps because it describes the bottomless black hole of instant, addicting entertainment in late-capitalist America (hello, Netflix bingers), it has enjoyed something like constant low-level virality in that time.

But because it’s so long and dense and hipsterish, and was written by a man whose personal struggles have been grossly romanticized all the more following his 2008 suicide, Infinite Jest has also become a headache for people serious about literature. There’s no easier way to make a bookseller roll her eyes than by thumping a copy down at the register and expecting her to be impressed—she knows you’ll never get through it.

Those intrepid souls who do digest the entire opus, meanwhile, have a tendency to become obnoxious evangelizers for the text. Should someone ask if you’ve read it, make no mistake: They want you to say “no” so that they can extol its Byzantine style, satirical mastery, and profound insight. They want to be the one who persuades you that Wallace was a genius.

Which brings us to jeremy1122. The redditor—who did not respond to request for comment—first popped up in r/books one year ago to offer “An introduction to Infinite Jest.” A trifle presumptuous, you might think: There are plenty of intros to this popular but intimidating book online.

I’ve read the book about eleven times, so I just want say a few words and address people who are thinking about reading it or are just beginning. Before you embark on your journey into the mind of a genius, you have to understand a few things that are very important. When we talk about David Foster Wallace, we’re talking about a man whose I.Q. could not be measured. Past 200, I.Q. tests get imprecise. We don’t know whether we’re dealing with a man with an I.Q. of 200 or 300 or what. We can’t measure it. When it comes to Wallace-tier geniuses, the standard tests simply don’t apply. You see, Wallace could have entered any field he wanted. He was a real-life Will Hunting.

It went on like this—much to the fury of r/books’ regulars. “You’re the type of reader and writer Wallace detested,” a top-voted comment reads. “You sound like a snob,” sniffs another. In due course, jeremy1122 confronted each of his detractors with (you guessed it) more craven Wallace worship.

The gimmick didn’t die in this thread. Ever since this auspicious debut, jeremy1122 has only ever used his Reddit account to wax pretentious about Wallace and his body of work, regularly provoking even more pretentious replies from other readers (the Joseph McElroy name-check above is a prime example). He parodies the most cringeworthy aspects of neckbeard faux-intellectualism by fully inhabiting this very mode, brilliantly enacting Poe’s law: He’s indistinguishable from the people he mocks.

His real talent, however, lies in wrenching conversation away from its purported topic. Here he answers a call for suggestions of books on European prehistory and physics, neither of which have much bearing on the plot of Infinite Jest:

On sex scenes in fiction:

On how to improve r/books:

On the greatest book titles: 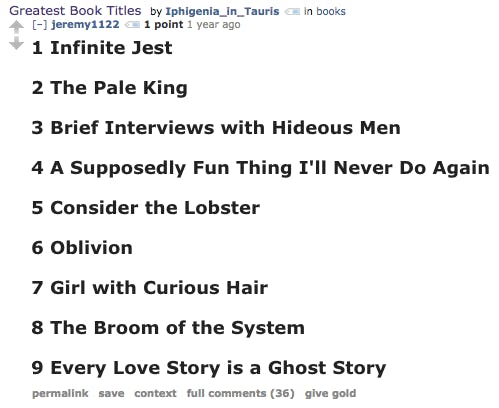 He even told a “joke” at one point: 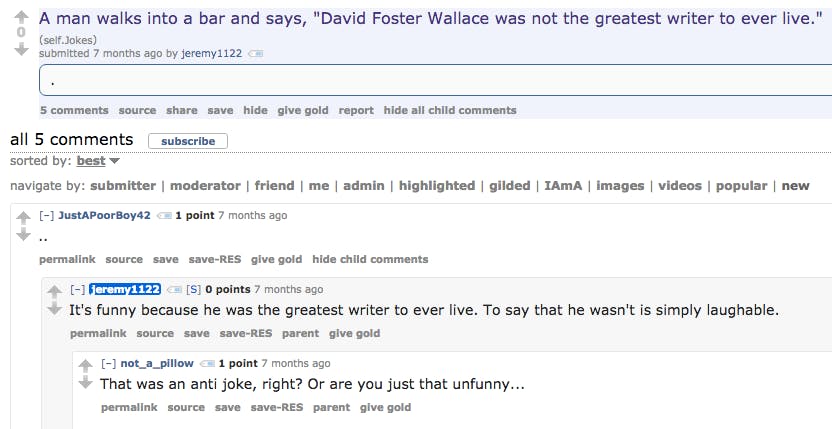 Whether downvoted, dismissed, our simply ignored, jeremy1122 remains a tireless advocate for David Foster Wallace and the author’s most enduring tome. Eventually, he comes to expose the weird insulation and monomania of reading itself—a motif worthy of a Jorge Luis Borges or Enrique Vila-Matas. In his worldview, there is nothing that falls outside the scope of this particular fandom, and nothing that it cannot explain in molecular detail.

In other words, he’s like every other Wallace obsessive on the Internet.