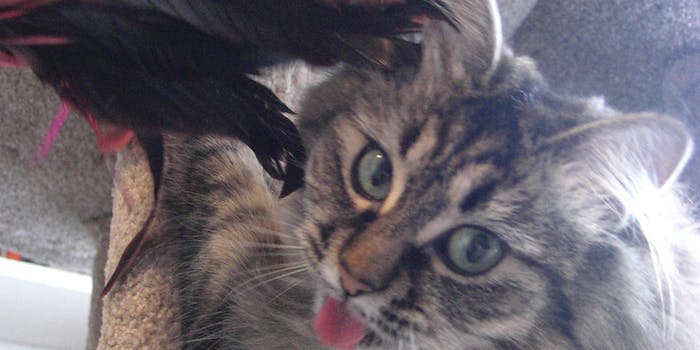 Cat literally scares the crap out of its owner

This is about as bad as cat ownership gets.

Some guys get all the luck. Others get whatever’s left over.

Redditor beholdthemastadon falls into the latter category. He was having a truly crappy weekend: A GI infection coupled with the fact that he was fired from his job meant that he had to salvage what little he could of the weekend from hell.

Naturally, he smoked a bunch of weed. That’s when his cat came into the picture. Beholdthemastadon recount his story for Reddit‘s “Today I Fucked Up” (r/TIFU) community:

“I was sitting on my couch, playing with the cat after having successfully blasted myself with as much THC as possible. We have one of those long wands with a feather and string attached to the end: needless to say, the cat goes ape-shit over this thing. I prop my feet up on the coffee table and am watching this little guy chase after this feather with everything he’s got. It’s great, and actually taking my mind off of things.”

When the cat eventually tired of the toy—or so beholdthemastadon thought—he lost himself in his weed-fueled thoughts. Unfortunately, he became a little too lost.

“….this fucking cat of mine lunges at this feather on the ground. Now, I’ve had time to completely forget that I’m playing with the cat, so it scares the living shit out of me. Next begins the most unfortunate game of dominoes I’ll likely ever experience: My foot shoots out and hits a Gatorade bottle that clatters to the floor, startling the cat, who then jumps on the table and knocks off my bottle of scotch, sending it shattering on the floor. This scares me as I jump up, knocking my shin into the table and sending me tumbling forward. I manage to fall into our TV stand, pulling my PS2 to the floor.

I finally managed to right myself and hobble around, trying to dull the aching pain in my hands and knees, when…
It strikes me… this strange sensation.

I’ve managed to shit myself. Awesome.“

His fellow redditors were quick to offer their sympathies and jokes—all except for one. Redditor Reads_TIFU—which may or may not be a bot—gave the story a new spin with a custom narration.

No, it sadly is not in Morgan Freeman’s voice.

Hopefully, the upcoming weekend will be a lot less hellish—and messy— for beholdthemastadon. And his cat.