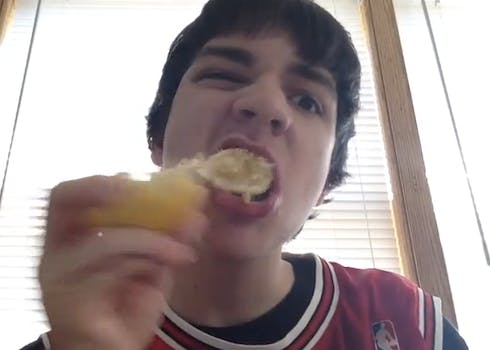 After Chicago beat Miami to end the Heat's 27-game win streak, a redditor Bulls fan made good on his promise to eat… well, you'll see.

The Miami Heat’s 27-game winning streak was snapped Wednesday, but LeBron and Co. weren’t the only ones to lose.

Redditor BlueSlam had to make good on his promise to do the cinnamon challenge—twice—and eat an entire lemon, peel and all.

A Chicago Bulls fan, BlueSlam didn’t think his team had a shot, considering stars like Derrick Rose and Joakim Noah were sitting out with injuries. But Chicago pulled off the win, and BlueSlam kept his word, and purchased the cinnamon and lemon Thursday.

Then, on video, the 17-year-old matter-of-factly swallowed two spoonfuls of cinnamon, then ate the entire lemon, not even bothering to spit out any seeds.

“The fact that you ate the ENTIRE lemon—rine [sic], skin, pith, everything—makes me respect you. Question your judgment, yes, but respect,” wrote redditor Calvertorius.