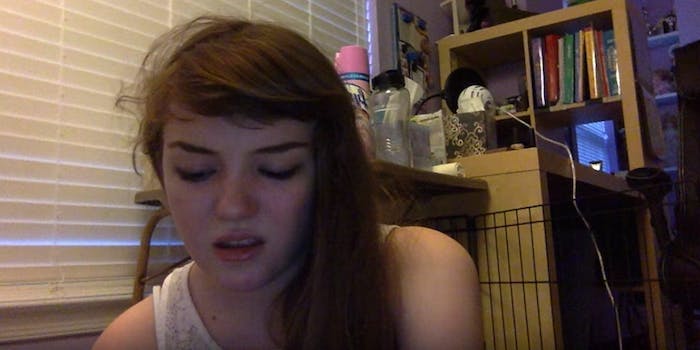 Does a girl on YouTube seriously believe that “English” and “American” are two separate languages? That’s what many Reddit users are convinced of after one of her videos started trending on /r/videos.

First, here’s the clip, which shows the girl talking about the “language barrier” between herself and an English dude she met on AIM, pondering why he referred to a video game costing “pounds.”

“The thing I’m wondering is, why does it weigh so much?” she asks. “Does it have to do with where England is located? So like, if you know the solar system, America’s in the middle, and England is the closest to the sun I think. So maybe there’s a possibility that there’s a difference in gravity or something?”

Right now, the Reddit comments are split 50–50 between people who think she’s kidding and people who are convinced she’s for real.

But here’s the thing: she’s definitely 100 percent joking. The video on Reddit comes from a YouTube user named Sean Welsh, who has racked up about 60,000 views in a day by stealing a video from a young comedian and passing it off as genuine. With this video, Welsh preyed on people’s misconceptions about American teenagers being total idiots.

If you look at the girl’s own channel, Our Third Life, you can quickly tell that she’s a very prolific comedy vlogger with a weird, meme-savvy sense of humor. She has a running joke where she’s in love with Donald Trump, and the channel posts videos with titles like “MINION ASMR ROLEPLAY,” parodying the micro-genre for “autonomous sensory meridian” footage of people whispering into the camera.

Screengrab via Our Third Life/YouTube