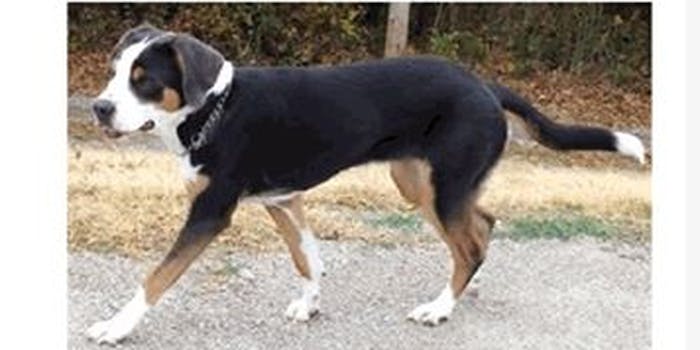 The strange saga of Heidi, the kidnapped Swiss mountain dog, has a happy ending

The redditor who dognapped Heidi has returned her after local news and police got involved.

The story of a rescued dog, apparently mistreated by her owners, has turned out to be a lot more complicated than it appeared.

Two days ago, redditor dogthedogsaver looked like a hero after he took the dog from a freezing carport the day after a Fort Worth ice storm. But when the owners found out that the dognapper was on Reddit, the tables quickly turned, as redditors heard both sides of the story of Heidi the swiss mountain dog.

Initially, the Daily Dot reported that redditor CGDarden, who posted a missing dog notice with a  $2,000 reward to r/FortWorth on Tuesday, was the Heidi’s owner. Shortly afterward, he sent us an email saying that he’d been posting only on behalf of the dog’s actual owners. The redditor said he’d been getting death threats from angry dog-lovers.

“It’s been a pretty bizarre day,” he told us.

On Reddit, despite dogthedogsaver’s lengthy description of how he “rescued” the dog, took it home, and then discovered it was showing signs of neglect, cgdarden was emphatic: “NO ONE HAS ABUSED THIS DOG,” he wrote. “Claims of abuse are absolutely fabricated.” He added that the dog’s original owners were “very sweet people,” a claim supported by other friends of the family.

“I live three houses down from the dog owner and know him personally,” commented VikingFrog:

Takes great care of his dog, and see him walking her almost every day. Have been to the duplex next to his and Heidi has plenty of space and shelter. It was cold that night, but definitely not anything that would put the dog in danger.

Another friend of the family, redditor DavidMoor, insisted he knew Heidi well:

I know the rightful owner of this dog. As a matter of fact, that dog has been to my house twice in the past few weeks, healthy, happy, and full of life. This is a well socialized dog, which is why it doesn’t surprise me she was happy to see the dog stealer. She loves people because she’s around them all the time. That is not neglectful behavior….

I was with the rightful owner at dinner and witnessed as he scoured the neighborhood in the snow and ice all night long looking for that dog. He continued through the weekend and even took off work Monday….

I don’t doubt that the dog stealers intentions were altruistic, but I believe they were a little overzealous….I only hope that with more context they’ll realize that the dog is in fact cared for and return her to her rightful owners.

The dog’s actual owners, as reported by Fox News, are Crawford and Mary Clay Gupton, who took their story to local media outlets—and the Fort Worth police.

According to @FortWorthPD, Heidi the $2000 Swiss Mountain Dog of Reddit & Facebook renown was dognapped, not rescued http://t.co/pji3UOF54I

As Reddit turned on dogthedogsaver, he announced plans to give the dog back, contacting the forum moderator, twilightmoons, who refrained from taking sides and apparently agreed to facilitate the hand-off between the redditor and the owners.

Heidi was reportedly given back last night at a shopping mall in Fort Worth.

But according to dogthedogsaver’s last update to his comment before deleting his entire Reddit account, things didn’t go as planned, and he seemed convinced to the end that giving Heidi back was the wrong decision:

Heidi has been returned.

u/twilightmoons did a poor job of handling the switch. He did not pick up the dog as he stated he would.

The owners were there instead, they charged me and demanded my name. So much for no confrontation or questions.

Oh btw,I gave them money to repair the lock and the first words out of her mouth were “give me THE fucking dog!” Way to be personally attached to your sweet puppy.

Even after redditors had heard both sides of the story, many weren’t sure what to believe.

“Chaining it up with a shitty shelter, not feeding it properly, and not checking for fleas is awful,” said trilobot.

Now that Heidi is back in the hands of her original owners, it’s up to the police whether to pursue a theft investigation against the redditor.