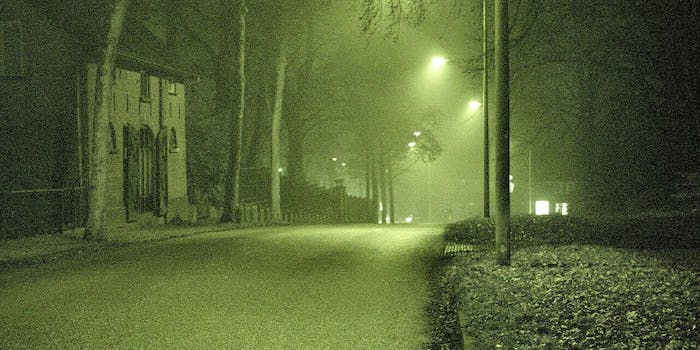 Reddit’s r/OffMyChest is supposed to be a safe forum on the social news site for posting confessions, but some acts can't be overlooked.

Reddit’s r/OffMyChest is supposed to be a safe forum on the social news site for posting confessions and airing out issues individuals are struggling with. But one user’s admission of statutory rape is now having unintended repercussions.

It was August 2011 and user pilot94 and his friend Patrick were on a bender—shoplifting, under age drinking, speeding, drunk driving, dealing drugs, and vandalizing parks.

“I knew some girls from school (I thought they were 15-16, they ended being 13-14) that I met at a party,” pilot94 recounted in a post titled “I should be in prison.” “One night they called us up and said they were drunk and wanted to have fun. We couldn’t say no. We drove out and picked all three of them up. We parked by the neighborhood pool, got in the back of the truck, and started going at it.”

According to pilot94, the two men had sex with the underage girls. While on the way back to one of the girls home a cop pulled them over. Both men were accused of rape and supplying drugs. A police investigation was conducted which showed that each of the girls were virgins and one spent the night in the hospital to have her stomach pumped and to be treated for vaginal tearing.

“The evidence against us was incredible,” pilot94 admitted.

Then the investigation apparently stopped.

For some reason the lead detective on the case and the chief of police were fired, leaving pilot94’s case in a state of flux. Pilot94 never saw the inside of a courtroom for his crimes. Since then pilot94 claims to have turned his life around, graduating from a “Top 500 school” and receiving a “full ride Army ROTC scholarship to a prestigious military school to study Russian and International Affairs and eventually receive a commission as an officer.”

Thanks to his Reddit post made a month ago, however, his day in court may finally come.

A few days ago pilot94 posted a photo of a scholarship he received from Army Reserve Officer Training Corps to Reddit’s r/military forum. Pilot94 has since deleted his account but a redacted version of the photo exists. 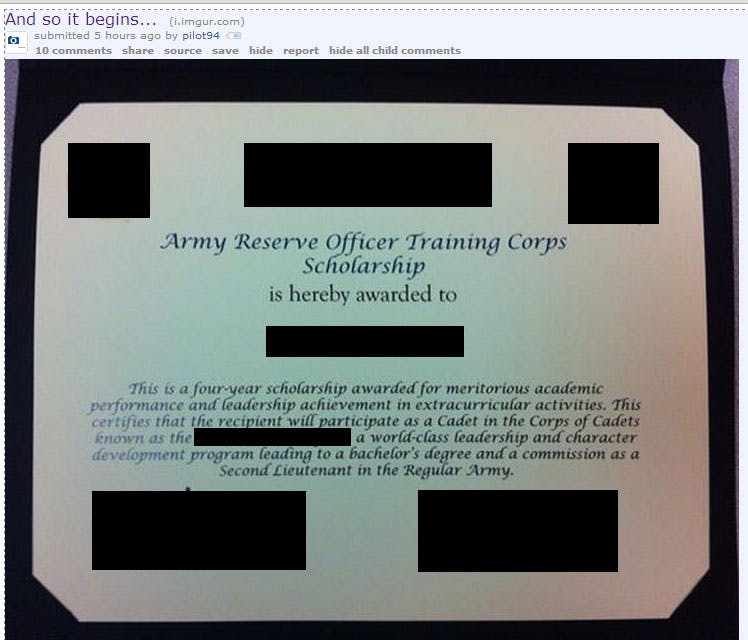 A handful of redditors recognized pilot94’s profile from his “I should be in prison” post and are contacting his school to report him.

Late Tuesday evening pilot94 created a new Reddit account to try and clear his name, under the post “Really, Redditors? You had to do it?” The simple answer: “Yes.”

“You ruined a couple of girls childhoods,” thebluebutton commented. “You make it sound like you’re a good person now and that you have turned over a new leaf but you never once indicated that you felt any remorse for these people you destroyed. I think you far exaggerate to us and yourself how good of a person you are, and how deserving you are of forgiveness.”

Update: Without access to the original photo of the scholarship award, and given the anonymous nature of Reddit, the Daily Dot is not able to independently verify the identity of pilot94 or his school.