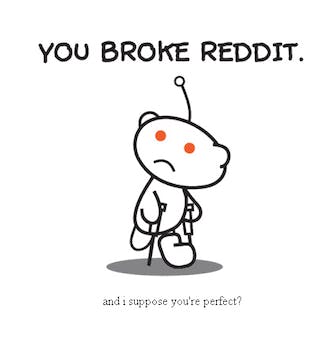 Reddit keeps comments even after users have deleted their accounts.

As has always been suspected of the Internet, when you delete something it never truly goes away.

That’s one of the major takeaways from Reddit’s new site-specific privacy policy, which spells out the company’s policy of keeping Reddit comments even after users have deleted their accounts and the 90-day storage of IP addresses even after deletion.

Reddit’s old privacy policy was vague and outdated, a legal boilerplate originally written for the magazine empire Conde Nast. The goal of the changes is to allow Reddit users to remain as anonymous as they wish.

User reactions to the updated policy have thus far been mixed. Privacy is one of the core values of Reddit, as stated at the beginning of the new policy, and it’s something the site’s users feel very strongly about. But it’s suffered some blows recently. (Violentacrez, anyone?)

While Reddit strives to be as anonymous as possible, the information is being stored somewhere. If required by law, Reddit may disclose your information. It just depends on how comfortable you are with that promise, and how much you trust Reddit to only do that if absolutely necessary. (For example, the Confession Bear meme, which stirred up media attention when a Reddit user allegedly “confessed” to a murder.)

We may disclose – or preserve for future disclosure – your information if we believe, after due consideration, that doing so is reasonably necessary to comply with a law, regulation, or legal request. If we are going to release your information, we will do our best to provide you with notice in advance via reddit’s private messaging system unless we are prohibited by court order from doing so.

Some redditors are not comfortable at all. They expressed concern that comments and messages can not be deleted but described a workaround where editing the comment to blank spaces, before deleting your account, actually erases the information.

The posts and comments you make on reddit are not private, even if made to a subreddit not readily accessible to the public. This means that, by default, they are not deleted from our servers– ever– and will still be accessible after your account is deleted. However, we only save the most recent version of comments and posts, so your previous edits, once overwritten, are no longer available.

Others were thankful and pleased that the policy has been updated to be Reddit-specific and less open to interpretation.

Other changes include a stricter age restriction on users 13 and under, making the age for membership 14, which set off a slight panic in the subreddit r/teenagers. Though Reddit’s moderators say they are not planning site-wide age verification, the subreddit has been discussing getting rid of tags for “young” and “13,” as well as what would happen if underage users are reported for using the site without parental permission.

The policy goes into effect May 15 and was written by Lauren Gelman, who is, as the Reddit post about the new policy, put it, “the founder of BlurryEdge Strategies, a legal and strategy consulting firm located in San Francisco that advises technology companies and investors on cutting-edge legal issues. She previously worked at Stanford Law School’s Center for Internet and Society, the EFF, and ACM.”

Gelman is answering questions about the new policy here.