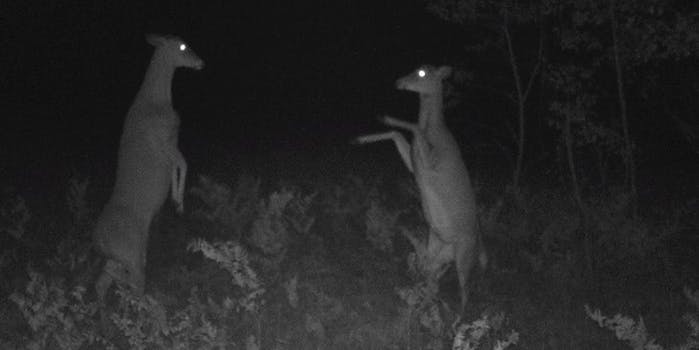 The creepiest fight ever caught on a hunter’s trail cam

Usually when a hunter has a trail cam, he’s happy to get any footage of deer that might make a nice trophy or dinner. But Reddit’s r/Hunting caught something special.

“Probably the most interesting thing I’ve ever caught on one of my trail cams,” user TheSaucerBoy wrote.

That would be two deer, grazing at night together in front of a camera, then raising up to fight in that ridiculous way that deer do. The way the photographs catch the light in the deer’s eyes, plus the staccato way they move—trail cams usually take individual photos, not video—makes it seem terrifyingly demonic, like some deer Satan is making his minions attack while we humans sleep.

Or, you can view it the way TheSaucerBoy did, as the beautiful moment of an impromptu midnight forest dance party.