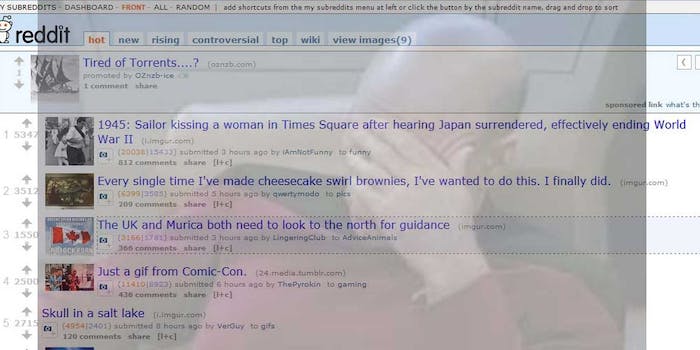 The worst posts to ever make Reddit’s front page

The botched Boston bombing investigation has some stiff competition.

Was the “detective work” put forth by redditors following the Boston Marathon bombings the worst thing that has ever made it to the site’s front page?

Redditors seem to think so—to the tune of over 3,000 karma points awarded to the dark point in Reddit’s history. Fast-acting redditors indirectly helped police—and the media—finger the wrong suspect immediately following the April 15 bombings. Reddit even issued a statement admitting to the mistake.

The collection of facepalm-worthy front-page posts was the topic of redditor stupidsexyflanders’ July 22 survey. Needless to say, the r/AskReddit thread itself made it to the site’s front page.

While the online chaos that followed the Boston Marathon bombings was indeed a low point for Reddit’s front page, other redditors reminded each other of the many other ways the most-viewed portion of the site had been desecrated.

“The Morgan Freeman AMA. I was so excited for that AMA and it was just terrible.” (kijafa)

“A picture of a pancake made it once. The whole fucking world is filled with amazing content. A pancake.” (Ihavenocomment)

“I guess the Ask-a-Rapist thread. It was basically a thread for rapists to come and talk about their conquests and then we thanked them for their bravery of talking about something so controversial.” (Ovary_Puncher)

“There was an AskReddit post a couple weeks ago that was an experiment to see if you could buy your way to the front page. OP bought everyone gold who commented on the post. It made it to the front page in about 20 minutes and then the mods deleted it.” (way_fairer)

“The safe! The time reddit spent wondering what was in that thing. Plus the poor guy had to delete his account. All in all an unfortunate situation.” (Nothingto_seehere)

“There was one submission, in all my years of reddit, that made me extremely disgusted and ashamed of being here.

It was an image submission of an extremely drunk girl, clearly out of it, on the toilet, with her knickers down. OP was patting himself on his back for being such an amazing white knight for buying her a fucking burrito. No mention of violating her privacy as she was vulnerable and in no position to give consent (for the picture and posting it online).

It hit front page, and all the top comments were about violating her.” (googuxcan)

“95% of Confession Bear posts. There are 2 or 3 on the front page at any given time, and most of them are a confession along the lines of “I threw a glass bottle into the trash instead of the recycling bin, so edgy.” (Mrwhiskers123)