Why Reddit had to crack down on the trolls

"Sorry, but we don't really ban for rape threats."

On Wednesday, the self-proclaimed “front page of the Internet” descended into chaos over Reddit‘s decision to ban a community exclusively dedicated to making fun of fat people. The subreddit r/FatPeopleHate, which couched cracking jokes about pictures of overweight people in a vague sense of striking a blow for public health, was one of five banned by the site’s management for being hives for harassment. Other subreddits that got the axe are communities like r/ShitN***ersSay, which was exactly what it sounds like.

“We will ban subreddits that allow their communities to use the subreddit as a platform to harass individuals when moderators don’t take action,” Reddit’s leadership said in a post about the ban. “We’re banning behavior, not ideas.”

A vocal minority of the site’s over 170 million monthly visitors used the opportunity to take a strong, principled stand. They created new forums where they could post pictures of fat people and then mock them. This was their Alamo, their Helm’s Deep. It was their grand stand against the tyranny of censorship. It was their proud, noble fight for their freedom of speech, their freedom to make fun of pictures of fat people (often found elsewhere on Reddit and leading to the harassment of the individuals picture) and then pat themselves on the back like they were doing something productive.

There were quickly attempts to create other subreddits in the same vein like r/fatpersonhate and r/fatpeoplehate2, but those were also quickly banned. 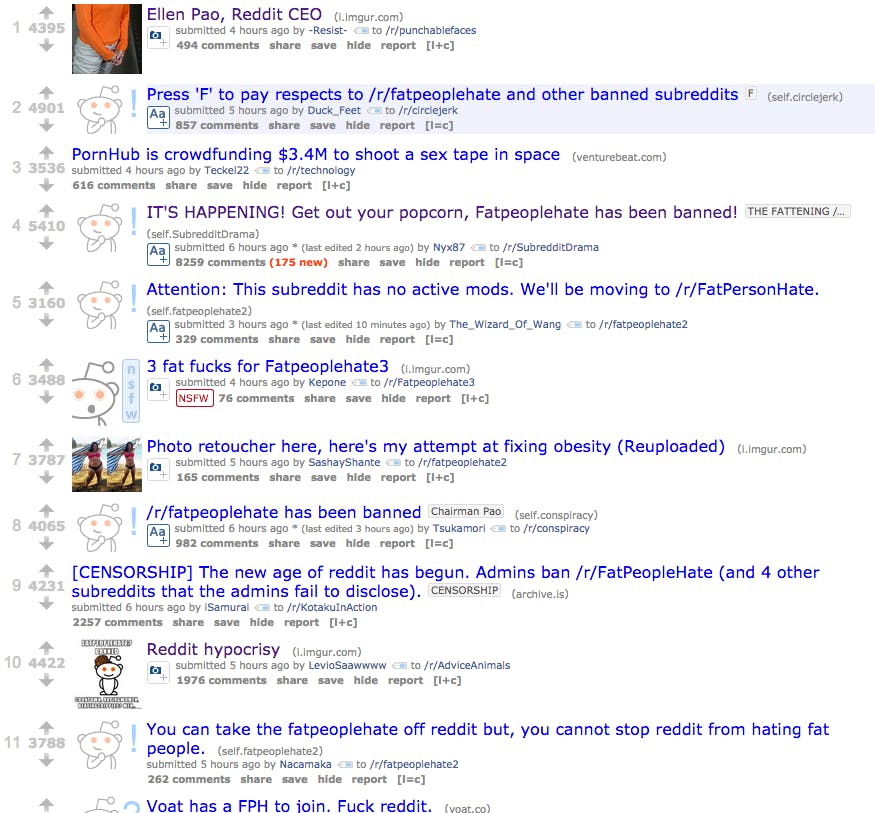 By Thursday morning, the tactics have shifted. The most popular stories on the site were a mix of memorials for actor Christopher Lee, who passed away over the weekend, and attempts to link Pao to images of swastikas and pictures of Shrek as a way to trick Google into pulling up those images when people searched for her name: 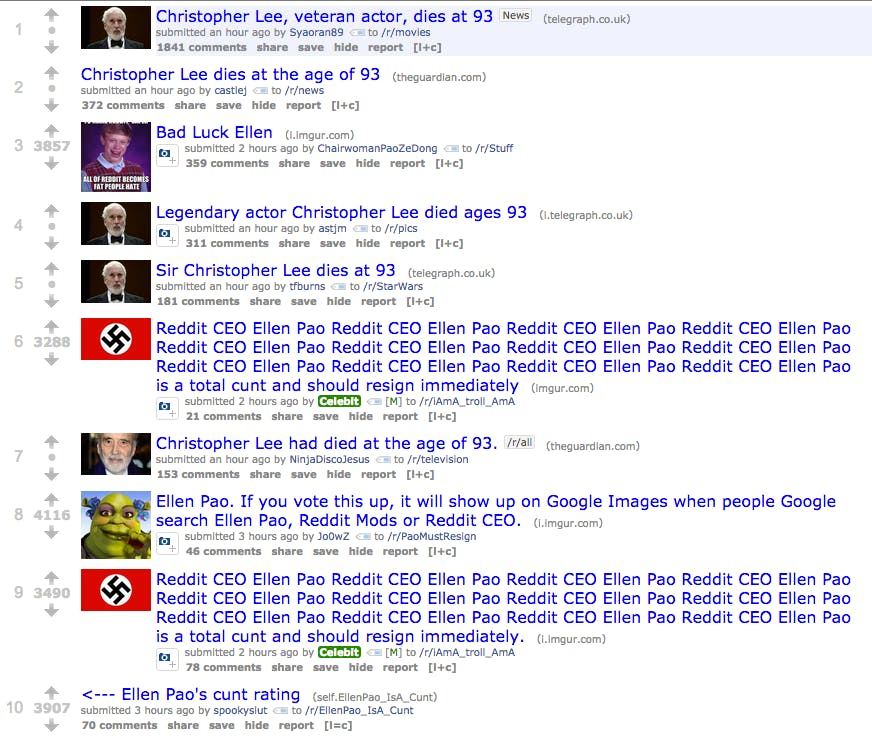 While users pledged to leave the site in droves, decamping to a Swiss Reddit clone called Voat where they could hate on fat people to their hearts’ content, all I could think was “finally.” Admins insisted the decision to ban these subreddits wasn’t about content, it was that they were directing harassment to other users of the site. Reddit pledged it would start cracking down on the harassment of its users last month with the implementation of a formal harassment policy, but it was difficult to know how serious the site’s administrators would be about enforcing it.

While most casual Reddit users only saw a slew of viral posts, communities—often those catering to the interests of women and minorities—were besieged by trolls.

The moderators of a subreddit called r/Rape, a community for survivors of sexual assault and their loved ones, told the Daily Dot last year that one out of every five pieces of content on the subreddit had to be deleted because it was either accusing women of making up their rape stories or saying those stories were “hot.”

This was their Alamo, their Helm’s Deep. It was their grand stand against the tyranny of censorship.

Many of the women who posted there were sent private messages with rape threats from trolls. When this harassment was reported to the site’s admins, the response was, at best, inconsistent. Sometimes people who repeatedly harassed other users would be banned from the site, but other times, the complaints were ignored completely.

As much as the site’s harassment policy can be summed in a single image, it’s this one a r/Rape moderator going by the handle TheYellowRose, found last year on the anti-GamerGate subreddit r/GamerGhazi. The user, whose name isn’t included in the screenshot, asked former Reddit admin and Head of Community Management Alex Angel, who went by the handle Cupcake 1713, about the possibility of getting a user banned due to rape threats.

What we’re witnessing right now are the birth pangs of a Reddit that cares about things like rape threats enough to ban entire communities when they make other users feel unsafe.

On one hand, it’s easy to credit the shift in company policy to Pao, who became an feminist icon in Silicon Valley for her unsuccessful gender discrimination lawsuit against prominent tech venture capital firm Kleiner Perkins. She also made waves in an attempt to make Reddit a more hospitable work environment for women by eliminating salary negotiations. Women typically don’t negotiate as aggressively as men, leading to a gender imbalance in salaries.

Redditors, at least the most vocally unhappy ones, blamed Pao’s “feminist agenda” for the subreddit bans, but a survey of Reddit users conducted in March showed that sacrificing the site’s reputation as a haven of unlimited free speech in favor of making Reddit a more comfortable place for its users makes a lot of business sense.

The survey, which garnered responses from nearly 17,000 users, found that users really enjoyed Reddit’s ability to point them in the direction of interesting content, but didn’t like its “increasingly negative and unsafe community environment.”

Half of the respondents who reported they wouldn’t recommend the site to a friend gave their reason as not wanting to “[expose] their friends to unpleasant content and users” or “appearing to support or participate in such content by association.”

Sometimes people who repeatedly harassed other users would be banned from the site, but other times, the complaints were ignored completely.

While people generally liked Reddit’s site as a whole, there was a distinctly less positive feeling about the community itself. Ninety-two percent of men were satisfied with Reddit overall, as were 84 percent of women, yet those numbers dropped to 69 percent and 58 percent respectively when people were asked about how satisfied they were with the site’s community.

Considering that many of the people bearing the brunt of the harassment are women, that gender gap is hardly surprising. Last year, the moderators of dozens of subreddits largely focused on the issues of women and minorities signed onto an open letter begging the admins to do something to make the Reddit community a safer place. Until Reddit updated their harassment policy in May, the response to their letter was silence.

Even so, Redditors who participate in site’s anti-feminist underbelly—the men’s rights advocates and the Gamergaters—have also reported receiving harassment. However, because enforcement regarding harassment has been imposed so inconsistently in the past, Wednesday’s subreddit ban immediately resulted in finger pointing. How come r/ShitNiggersSay was banned, but r/Ferguson, an explicitly racist subreddit run by white supremacists aimed at denigrating African Americans, was allowed to remain active? Why was r/FatPeopleHate banned for mocking obese people, but r/ShitRedditSays allows to stay active when it exists only to mock what it views as the racist and sexist comments of other Redditors?

Reddit’s management insists that the targeted subreddits were taken down due to facilitating direct harassment of other users rather than hosting offensive content, but the previous lack of enforcement made it hard for many Redditors to appreciate the distinction.

These are fights that typically happen under the surface. The average person who browses Reddit on his or her phone for a few minutes while waiting for the bus likely has no idea any of this exists. These battles are typically relegated to relatively niche subreddits, not the ones users are subscribed to by default when they first sign up for the site. As a result, users have had to actively seek them out.

However, there are times, like on Wednesday, when all of that toxicity bursts through and it becomes impossible to ignore. For an outside observer, looking at the thousands of upvotes given to the idea of punching Pao in the face is a glimpse into Reddit’s pulsating, decidedly unattractive id.

For a company already worried that the bad behavior of a subset of their users will scare away everyone else, both the giant public temper tantrum and the scandalous subreddits whose erasure sparked it are evidence that Reddit understands the trolls infesting its community are the company’s greatest liability.

In discussions about the announcement, a large segment Redditors threatened to leave for Voat, which proudly lacks the same kind of content controls now enforced by Reddit. If the worst elements of Reddit’s community are ready to abandon the site in favor of Voat the moment Reddit gets serious about harassment, it’s a sign that Reddit’s management is finally doing the right thing.

Aaron Sankin is a staff writer covering politics and technology at the Daily Dot. He has been a Redditor for six years.