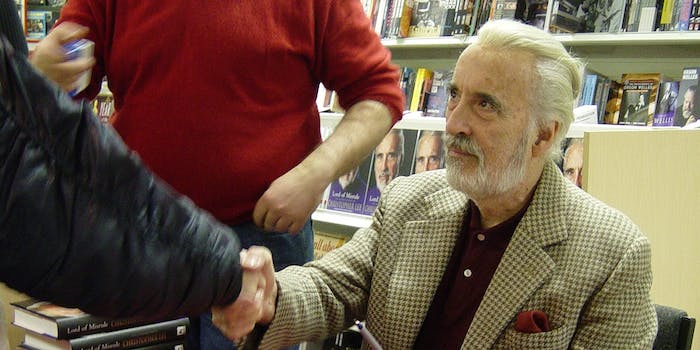 He had a career spanning decades.

Sir Christopher Lee, a veteran actor, musician, and author whose career spans decades, died Sunday morning in London. He was 93.

Lee was being treated for respiratory problems and heart failure at Chelsea and Westminster Hospital in London for the past three weeks; he even celebrated his 93rd birthday there. His wife Birgit, to whom he has been married for more than 50 years, waited until close family members had heard the news before she disclosed it to the public.

Younger audiences may remember Lee for his roles as Count Dooku in the Star Wars prequels, the Jabberwocky in Tim Burton’s Alice in Wonderland, and Saruman in the Lord of the Rings and Hobbit trilogies. He was a giant Lord of the Rings fan, reread the books every year, and was the only cast member to have met J.R.R. Tolkien.

But Lee already had a long career in horror films before he joined these fantasy universes. He had been acting since 1946. He said he would never retire after receiving the BAFTA fellowship in 2011 and was attached to The 11th, which was due to start filming in November.

Lee made a career of playing villains, and he may be best known to older audiences as Count Dracula in numerous films for the horror-movie studio Hammer—often with fellow Star Wars actor Sir Peter Cushing as Van Helsing. He also played a Bond villain in The Man With the Golden Gun, and he had a personal connection to author Ian Fleming. The Bond writer became a step-cousin after his mother, Countessa Estelle Carandini di Sarzano, remarried one of Fleming’s uncles.

Lee was also a World War II veteran. He was attached to the Special Operations Executive—a service so secretive that he was forbidden to talk about what he did as part of it—and he rose steadily through the ranks of the Royal Air Force. After the war ended, he was tasked with hunting down Nazi war criminals. He once famously corrected Peter Jackson on the proper sound a person makes when being stabbed in the back.

He had a family of musicians on his mother’s side, and he had a successful career in symphonic metal, particularly in his later years. He received a knighthood from Queen Elizabeth II in 2009.

Lee’s friends and fans, many of whom are just now waking up to the news, memorialized the actor on Twitter by sharing memories of his decades of work and words of wisdom.

Aw man, Christopher Lee has died. End of an era – he was the last of the great Hammer stars.

RIP Christopher Lee and Ron Moody. Someone up there is putting on one hell of show and needs the best there is.

We're saddened to report that Sir Christopher Lee has passed away at 93. Our thoughts are with his family. pic.twitter.com/q7WlTsAQ0X

So so sorry to hear that #christopherlee has passed away. He was a fascinating person. Threw a bic pen into a tree in front of me. #legend

Hammer Films, Lord of the Rings, metal albums, and of course Howling part 2. What a great and eclectic career. RIP Christopher Lee.

A few years ago I had the honour of working with Christopher Lee. He was, by all accounts, a legend. He's in Valhalla now.

H/T The Telegraph | Photo via Henry Burrows/Flickr (CC BY SA 2.0)