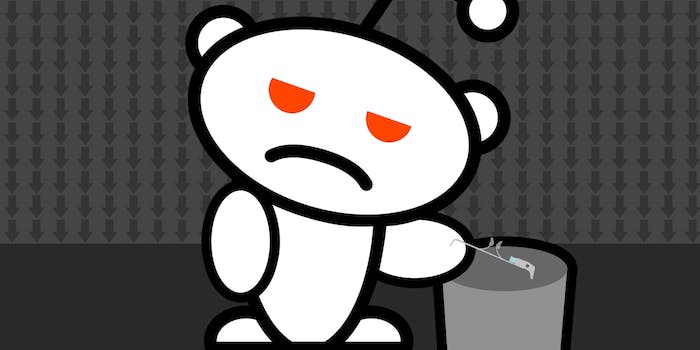 After a week full of moderator and censorship drama, r/technology gets the boot from Reddit's coveted front page.

Reddit’s most popular technology forum has lost a coveted position at the top of the self-proclaimed “front page of the Internet.”

Earlier today, Reddit staff took away r/technology’s status as a “default” subreddit—a special designation given to only 25 of the site’s tens of thousands of communities. Every time a new user joins Reddit, they subscribe to these defaults automatically, which in turn allows these subreddits to direct huge amounts of traffic. Any link submitted to a default stands a chance of hitting Reddit’s front page, which saw 114 million unique visitors last month.

At the helm of each of these 25 subreddits, as with all others on the site, are volunteer moderators who set the rules for their forums and answer to no one except themselves.

The decision by Reddit administrators to demote the forum ends a tumultuous week for r/technology. Earlier, a team of redditor sleuths discovered that moderators had banned, in secret, common terms from headlines, including “NSA,” “Bitcoin,” and “Obama” from being submitted within headlines. Many would argue those terms have an essential value to readers interested in technology, but the ban was never put up for discussion among the subreddit’s millions of subscribers.

The drama actually began, however, in late March when redditors revealed that threads with name of electric carmaker “Tesla” in the title had been banned for nearly three months. Moderators relented after widespread outrage, but that particularly case of censorship was clearly just the tip of the iceberg.

An r/technology moderator, agentlame, explained that moderators used to automatically to filter posts containing words moderators would likely delete manually because of what they considered “politicized” words.

“We don’t have enough active mods and posts that break our rules can make it to the front page in less than an hour,” agentlame added. “So we’re stuck using a bot.”

One of these inactive r/technology mods was actually Reddit cofounder Alexis Ohanian, who admitted that he hadn’t been active “on *any* subreddits in years” shortly after our story on the banned words ran. Ohanian removed himself from his mod position on r/technology after the banned terms list was revealed.

Over the past 48 hours, the list of moderators for r/technology has changed constantly. Eight different redditors have been added. Subreddit power is structured based on seniority; you can only remove a fellow mod if he or she joined after you. This leaves the subreddits prone to abuse when a pair of high-ranking mods disagree. In r/technology’s case, this internal power struggle was best illustrated by a screengrab of the moderator log, which showed one of the subreddit’s top moderators unilaterally removing some mods and changing the permissions of others.

”I tried to help to turn this subreddit around,” wrote redditor Doctor_McKay, who was briefly added as a moderator before stepping down amid the turmoil. “I really did. I was stonewalled at every corner.”

The last two high profile subreddits to be removed from default status were r/politics and r/atheism in July after similar internal moderator turmoil.