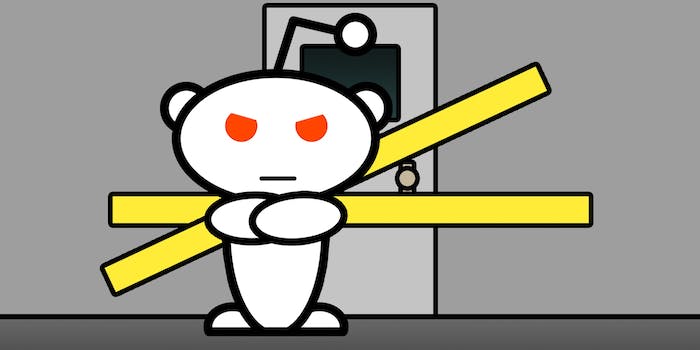 The announcement came just hours after Imgur was accused of removing r/fatpeoplehate's posts.

Mere hours before Reddit took the drastic step of banning five controversial subreddits on Wednesday, the head of Imgur came to one of them to defend his company.

Accused of censoring pictures linked to by r/fatpeoplehate—it’s exactly what it sounds like—Imgur founder and CEO Alan Schaaf denied the charges.

Shaaf’s is an important vote to Reddit, as his is the service redditors use most frequently when they want to post pictures. But just a few hours later after his comments, the team at Reddit announced that they had banned five controversial subreddits, one of them r/fatpeoplehate. Could the claims against Imgur have been coincidental?

Posts on the subreddit r/undelete and FPH Tuesday revealed that posts were being taken down from Imgur. The original post is no longer available as it was posted directly to the newly defunct subreddit, but another post on r/undelete captured some of the text:

Imgur is currently removing images from this sub published to imgur. So when you upload an image, do not click publish.

We’re not completely sure, this is just what we believe they are doing now. We’ll let you know when we learn more.

Schaaf’s response to this claim is also no longer available, but the screengrab below shows the complete content of his message. 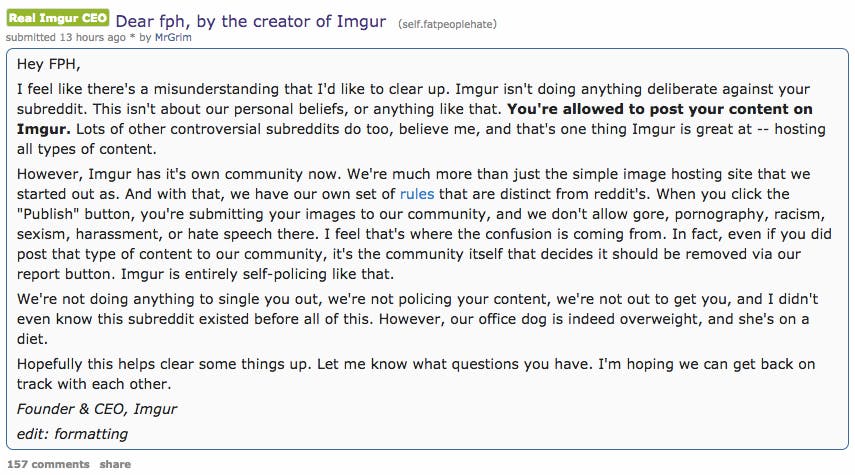 Our goal is to enable as many people as possible to have authentic conversations and share ideas and content on an open platform. We want as little involvement as possible in managing these interactions but will be involved when needed to protect privacy and free expression, and to prevent harassment.

It is not easy to balance these values, especially as the Internet evolves. We are learning and hopefully improving as we move forward. We want to be open about our involvement: We will ban subreddits that allow their communities to use the subreddit as a platform to harass individuals when moderators don’t take action. We’re banning behavior, not ideas.

People were able to reply to the post with questions, and predictably many of them were about what distinguished these particular subreddits from other offensive subreddits. Fat-shaming subreddit r/fatpeoplestories continue to flourish, for example. Others controversial hangouts, like r/candidfashionpolice, which posts technically legal pictures of scantily clad underage girls, and the self explanatory r/watchpeopledie, have yet to get the boot.

Someone at Reddit responded to a specific inquiry about r/shitredditsays, the self-appointed Reddit watchdogs and bane of Reddit’s men’s rights movement, about why they aren’t considered a harassing community.

We haven’t banned it because that subreddit hasn’t had the recent ongoing issues with harassment, either on-site or off-site. That’s the main difference between the subreddits that were banned and those that are being mentioned in the comments – they might be hateful or distasteful, but were not actively engaging in organized harassment of individuals. /r/shitredditsays does come up a lot in regard to brigading, although it’s usually not the only subreddit involved. We’re working on developing better solutions for the brigading problem.

In another thread, they emphasized that they’re “banning behavior, not ideas.”

In the meantime, the scorned FPH users are firing back. They’re continuing to upload fat-shaming photos to Imgur, and they’ve reassembled on r/fatpeoplehate2 and r/fatpersonhate.

Hate can’t hide, but it sure can run.