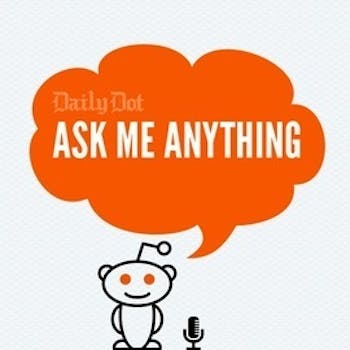 Reddit’s latest week of live question-and-answer sessions was a definitive win for cancer research and patients.

Redditor DonateYourMarrow led the charge on Wednesday. He signed up to donate his marrow earlier this year and just learned that he’d been matched with a one-year-old child. His post at r/IAmA went straight to the site’s front page and helped encourage at least 650 redditors to sign themselves up as bone marrow donors.

Also gracing the stage this week was Kevin Cochran, a bicyclist who rode 4,000 miles last year to raise money for cancer research. He’s doing it again this year and turned to Reddit for help promoting his ride.

“Reddit, I hear you’re good with causes,” he wrote. Spot on, Mr. Cochran.

Cancer wasn’t the only thing redditors discussed this week. They dissected the experiences of two accident victims: one who was hit by a van going 90 miles per hour, and another who chopped off his fingers in a woodworking accident.

1. IAMA registered bone marrow donor because of a Reddit post. I just got notified of a match.

Q: No questions, just want to thank you. Current leukemia patient halfway through treatment…no transplant necessary for me, but what you’re doing is absolutely amazing. Isn’t it crazy how easy it is to save a life? (junenovember)

A: At most I will have 2 weeks of pain and discomfort and may get to save a life. Worth it.

2.IAMA Jewelry store clerk. I handle thousands of dollars of merchandise every day, and I’m ready to spill the beans on the industry to help redditors. Boyfriends and husbands, take note. Girlfriends and wives, learn and appreciate.

Q: What are mistakes typical customers make most frequently when buying jewelry? (Clsjajll)

A: The biggest one is ring size. Tips for gentlemen: If you want to buy your girlfriend a ring, bring her in. She can find the one she wants and we can make sure it fits on her finger perfectly. It’s not any less romantic unless you’re picking your nose the entire time.

3. I was on the very last U.S. military convoy to leave Iraq. AMAA

A: Honestly when we hit K-crossing we we’re pretty pissed. At that point we had been running 12 hour missions everyday for the better part of a month so we were pretty smoked. It was a huge dog ‘n’ pony show with lots of reporters and brass running around. I think most of us just wanted to take a hot shower and sleep for 20 days.

Funny thing is, we had no idea that all operations were going to stop so soon, up until that day we were told the end date was the 31st.

4. IAMA guy who biked 4000 miles cross-country to raise money for cancer in 2010, and am doing it again this summer. Reddit, I hear you’re good with causes. AMA.

Q: I’m still not sure how doing stuff like this raises money… wouldn’t it raise more money if the people who were donating to see you bike just donated the money anyway, and then instead of spending hours biking your worked at a job and donated that money too? (josh42042)

A: That’s a complicated question. Maybe, but there are a few other factors at play. One of our goals is to raise money, but another is to spread awareness. We raise money in each community that we cycle through, we give cancer awareness presentations, and we volunteer at relays for life and hope lodges. So the question is, does that impact outweigh what we could make at jobs?

But it’s even more complicated. Especially in financial times like these, people can’t always donate money, but they can support us with goods. So if a bike shop will do free maintenance and a subway shop will give us a day’s worth of food, then we can live for free, which we couldn’t do if we just worked a job.

But more practically, people get asked for money a lot. There are tons of organizations trying to raise money for causes, and we have our own unique way. You’re right that our model might not maximize fundraising, but we have other impacts that we’re proud of and that we think are worth it.

5. I am a guy who was rear-ended on my motorcycle by a Van going 90+ miles per hour, story and pics inside.’

Q: What did the van driver say to you? How long, time-wise, did it take to stop? What went through your mind?

A: The tires were squalling as he was jamming on the breaks, I don’t know how long it took to get to a stop, seemed like forever but in reality was probably about 20 seconds. I just grabbed onto the handlebar base and part of the frame and cringed until it was over.

The driver was incredibly apologetic.

What was going through my mind was just ohhhh shit don’t let go over and over again.

6. IAmA person that essentially severed all of his fingers on a tablesaw. AMA

Q: Recreational woodworker here. I’m sure you’ve had time to think about how/why this happened, any words of wisdom? I’d love the reap the benefits of all your, “If only I…” thoughts. (bicyclingfool)

A: My mistake was getting comfortable and letting my guard down when i flipped the power switch off, even though the blade was still spinning at nearly full speed. I was working late and in a hurry to finish up so i could get home and just wasn’t being careful.

Just respect the tools you are using and remember that they don’t give a shit whether they are cutting through wood or through flesh. As long as you are fully aware of where your hands are and what they are doing, you should be fine. If you think your fingers might end up getting too close to the blade, use a push-stick.

7. I am a totally blind redditor

Q: Do you dream with sight?

A: This is probably the question I get most frequently. I dream in the same way I experience things in my waking life, using sound and touch primarily to create images which I assume my brain processes in similar ways to how yours processes images.