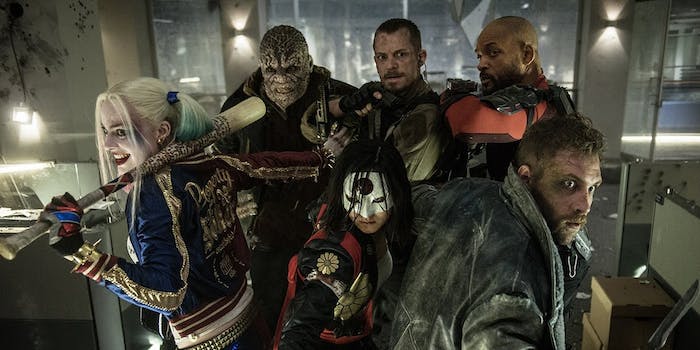 After Batman, Spider-Man, and James Bond got a clean slate, audiences are all rebooted out.

I keep replaying the video, trying to work out what’s not registering. Umpteen views in, I know what to expect from Fox‘s new Fantastic Four trailer—but like a Game of Thrones fan in reverse, I rewatch in hopes it’ll make more of an impact.

Fantastic Four—Fant4stic, if you’re willing to humor the marketing—looks like a film I’d have been stoked about ten years ago. At any rate, it looks better than the Fantastic Four film Fox released ten years ago. While fan reaction on Twitter remains widely positive, why then am I not feeling it?

I can’t decide what makes this trailer unsatisfying. Partly it’s the familiarity: I know its music from Broadchurch, its speeding-through-the-dust coupé from JJ Abrams‘ first Star Trek, its looming space monoliths from Prometheus, and its brooding male monologue from last year’s X-Men (also a Simon Kinberg script for Fox). The film’s brooding Manhattan skyline looks recognizable from somewhere or other—Amazing Spider-Man? Avengers? But Marvel‘s in-house productions are just as formulaic and still manage to be joyous. Fant4stic isn’t filling me with joy, or with much of anything else—I’m just drawing a blank.

The trouble is, I’m all rebooted out. Ten years ago with Batman Begins heading to theaters and Daniel Craig‘s first Bond film on the way—both fresh starts in the wake of franchise-killers—reboots seemed a daring innovation, Hollywood‘s newest way of rescuing film series past their prime. Today the technique has been done to death—with Superman, Spider-Man, Godzilla, RoboCop, and Planet of the Apes all getting rebooted in recent years. Fant4stic might be one thoroughly justified reboot—Marvel’s first family deserves a better outing than they got first time round—but I’m too worn out on cinematic rehashes to summon any excitement.

Miles Teller might brood impressively throughout the trailer, but how moody can an elastic hero called Mister Fantastic be?

Among critics and fans alike, the biggest complaint about Andrew Garfield‘s Spider-Man films is that the first came only five years on from Spider-Man 3—a weaker film than its predecessors, but by no means a Batman and Robin. Telling much the same story and having less fun with it, the reboot has done little more than make Peter Parker‘s world gloomier, a tonal change that worked for Bond and Batman but feels arbitrary and misplaced. Executives see darker, grittier reboots as a miracle cure for underperformance and sequelitis and seem to have given the Richardses the same treatment. Miles Teller might brood impressively throughout the trailer, but how moody can an elastic hero called Mister Fantastic be?

Audiences in North America are clearly tiring of uninspired reboots, after both Amazing Spider-Man films grossed less than their predecessors. When JJ Abrams took over Star Trek, he choose not to reboot it outright, ensuring via time travel and Leonard Nimoy that while his Enterprise had its own cast and continuity, the film remained a follow-up to earlier ones. Increasingly, filmmakers are following Abrams’ lead, fixing their franchises without performing complete overhauls. Like MySpace and Richard Dawkins, reboots had their heyday in the mid-to-late 2000s—and today, cinema’s best series are finding new ways to start fresh.

It’s universally agreed that after Bryan Singer’s departure, the X-Men series lost its way—first with an inferior third outing in 2006, then a failed spin-off in 2009. But X-Men wasn’t rebooted. Instead producers persevered, releasing a prequel, X-Men: First Class, in 2011, a much improved Wolverine film in 2013, and X-Men: Days of Future Past—a time-travelling, continuity-adjusting prequel-sequel in the Star Trek model—last year. While Wolverine‘s embarrassing first solo film is now politely ignored, events from the third X-Men are worked into both the newest films, built upon rather than discarded. Fixing instead of trashing the series meant that last summer, X-Men‘s seventh film was its biggest critical and commercial hit to date.

Like MySpace and Richard Dawkins, reboots had their heyday in the mid-to-late 2000s.

The Terminator franchise seemed another prime candidate for a reboot when its fourth film flopped in 2009. Before the first trailer emerged for the upcoming Terminator Genisys, no one was quite sure what it would involve, fans largely wary of another tortured cash-in. The trailer’s premiere changed minds online, making it clear Genisys will do for Sarah Connor what JJ Abrams did for James T Kirk, revisiting the original film’s events in a revised timeline. If any series were made for a time-travel remix as popularised by Abrams’ Star Trek, Terminator—a franchise based around rewriting the past—would be it. However, with sci-fi cinema proving ever more bankable, we’ll likely see more films go this route over the next few years.

Other upcoming films are embracing continuity rather than disowning it. After three much-maligned prequels, Star Wars is reconnecting with its initial trilogy, bringing back original cast members for this December’s The Force Awakens. Spectre, the follow-up to Sam Mendes’ Skyfall, seems likewise to be bringing back Jesper Christensen’s Mr. White from the unloved Quantum of Solace, sensing perhaps that tying up a loose thread will prove more satisfying than neglecting it. After lukewarm reactions to 2012’s Legacy—a reboot all but officially—Matt Damon is set to return to the Bourne films next year, playing the eponymous spy in middle age, and popular fan theories hold that when Robert Downey Jr. steps down as Iron Man, Marvel’s universe will see a different character don the mantle instead of restarting from scratch.

Against all this, the Fantastic Four reboot seems old hat, a storytelling move that would have been intriguing last decade but rings creatively hollow in 2015. However well Fant4stic turns out, even acknowledging that a clean celluloid slate was likely what its characters required, the well has been poisoned—instinctively, it’s hard for me to feel studios today are retelling their biggest-selling stories for anything other than a fast buck.

The reboot is over: in its place, filmmakers are remixing, revisiting and continuing their mythologies, and these are the stories I’m excited to see told.