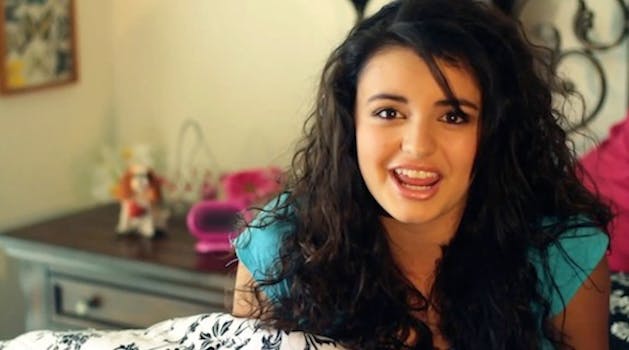 Rebecca Black has demonstrated that online infamy can extend into real life, too.

The Anaheim, Calif., teen has been forced out of school due to bullying over her hit song “Friday,” ABC News reports.

After the 14-year-old’s music video went viral in March, Black said she has became a target at school.

“When I walk by they’ll start singing ‘Friday’ in a really nasally voice,” she said to ABC, giving an example of her daily struggles with school bullies. “Or, you know, they’ll be like, ‘Oh hey, Rebecca, guess what day it is?'”

For now, Black’s mother, a teacher, is homeschooling her. She hopes that this will also give her daughter time to focus on her career.

However, homeschooling may not take her away from bullies. Black has also been the subject of online bullying. In April, Black received death threats, prompting a local police investigation. More famously, on March 15, a rumor falsely accused her of being pregnant.

“Waking up to a rumor that you’re pregnant is not fun,” Black told ABC. “It’s just frustrating, because I mean, I’m still, like, excited over my first kiss.”

Black, who won the Choice Web Star in Fox’s Teen Choice awards on Sunday, is no stranger to the media.

Black wrote on her twitter account that ABC Nightline’s full story on her will air tonight. The special, title “Underaged and Famous,” will be on at 10/9 central. Will you be watching?

The Daily Dot contacted Black’s team for a statement but did not receive one by press time.