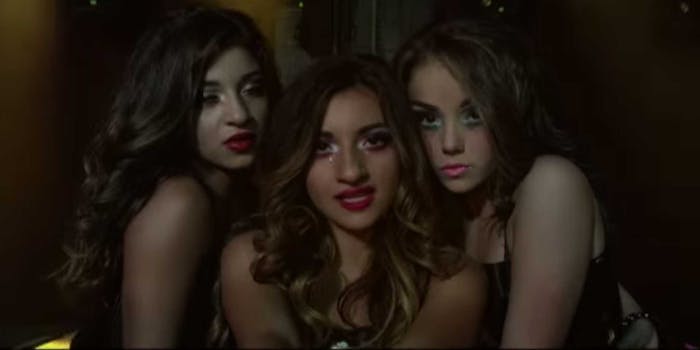 She clearly learned nothing from her mother's mistakes.

Chair-flipping Real Housewife of New Jersey Teresa Giudice may have just been sentenced to 15 months in prison for tax fraud along with a $415,000 fine, but her eldest daughter Gia isn’t quite feeling the pinch. The 13-year old just launched a Kickstarter for her girl group, 3KT, which hopes to raise $7,500 to shoot a Christmas music video. Because nothing better exemplifies the charitable spirit of the holidays than helping the daughter of a felon who was jailed for living beyond her means shoot a frivolous vanity video.

3KT, comprised of Giudice’s daughter Gia and her friends Alexa Maetta and Cristianna Cardinale, released an incredibly risque cover of Britney Spears’ “Circus” that even auto-tune couldn’t save. Giudice reportedly spent over $10,000 producing her daughter’s video, despite having been sentenced just weeks prior on multiple counts of fraud, bankruptcy and tax evasion.

The girls of 3KT are now using Kickstarter to shill for the $7,500 they need to make a music video for their original Christmas song, “Season of Joy.” At press time, the crowdfunding campaign had only raised $817.

Despite the stigma surrounding her family and their handling of money, Gia and her friends attempted to reassure the world that they were shooting this video for a good reason.

“We were born to perform and entertain, and we are so lucky to be able to do this in such a big way,” they wrote. “We want to empower and inspire other young performers to FOLLOW YOUR DREAMS AND NEVER GIVE UP!”

Judge Esther Salas, who sentenced the Giudices, admonished the family for the values they raised their children with, claiming “You need to teach your daughters discipline. If you don’t have it, don’t spend it.” Despite the judge’s warning, the youngest Giudice is forging ahead. If you would like to donate to the decline of American society, you have until Dec. 12.