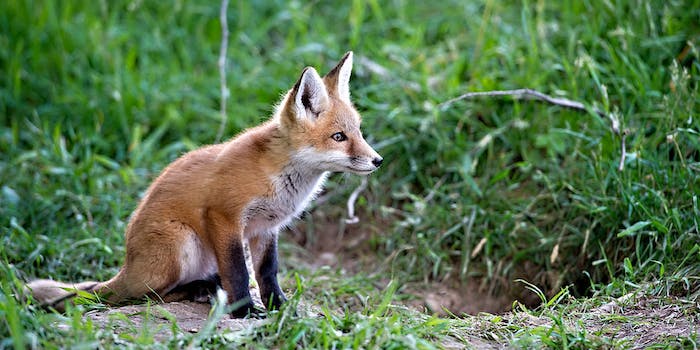 The real thing is better than anything we could’ve imagined.

It should be no surprise that real fox noises sound nothing like “The Fox,” but the real thing is better than anything we could’ve imagined.

Dawn is one of the resident foxes of the Nuneaton and Warwickshire Wildlife Sanctuary, and while foxes are not pets, she was initially mistaken for a dog when she was taken to a rescue center. When the center realized the mistake, she was taken to the Sanctuary, but by that point she had become too tame to survive in the wild.

At the Sanctuary, Dawn is a fairly carefree creature, so when it’s finally time to wake her up, it’s so much a dangerous risk as much as a reason to smile.

And she may be a fox, but she still displays plenty of dog tendencies until you hear that sound.

Over at PopSci, Dan Nosowitz goes into detail about what red fox sounds actually are:

The most commonly heard red fox vocalizations are a quick series of barks, and a scream-y variation on a howl. All fox vocalizations are higher-pitched than dog vocalizations, partly because foxes are much smaller. The barks are a sort of ow-wow-wow-wow, but very high-pitched, almost yippy. It’s commonly mistaken for an owl hooting. That bark sequence is thought to be an identification system; studies indicate that foxes can tell each other apart by this call.