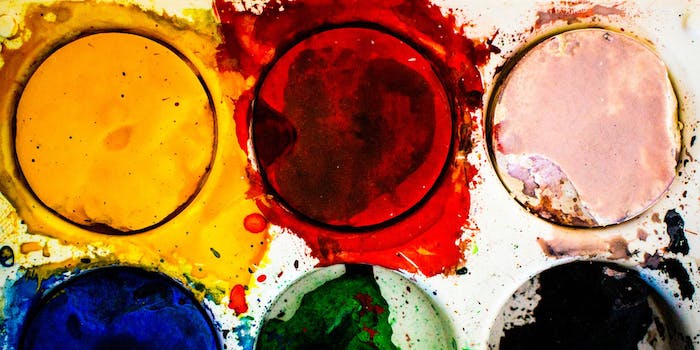 Acknowledging the problem starts with a palette swap.

Last week, the Los Angeles Police Department briefly detained Django Unchained star Danièle Watts after she engaged in a public display of affection with her white partner Brian James Lucas. In her account, Watts says that she was “making out” with Lucas in the front seat of their car when a man told them to “stop putting on a show.” The eyewitness who made the 911 call, on the other hand, alleges that they were having sex in the car. If you’re wondering what kind of a person believes that an interracial couple’s affection constitutes a public emergency, you’re asking the right sorts of questions about this incident.

The police description provided by the eyewitness should also raise your eyebrows. According to the L.A. Times, the eyewitness described “a black woman wearing a shirt and floral shorts, and a white man with a black tank top.” That’s odd. Why did the eyewitness specify the race of the couple and note that the “black woman” was wearing “shorts” while somehow failing to specify whether the “white man” was wearing shorts or pants? Surely the length of his bottoms are just as relevant as the length of hers. Watts’ partner speculates on Facebook that the person who called the cops must have racially profiled the couple based on their appearance, assuming that Watts was a sex worker and that he was a client.

This story made the rounds on social media this week, unleashing a particularly concentrated level of Internet outrage because of Watts’ level of célébrité. But racial profiling is more than just a public spectacle to gawk at, and it’s more than just a problem that affects law enforcement; racial profiling is also a collective cultural problem. If you grew up white in America like I did, you’ve been raised to perform all sorts of subconscious acts of racial profiling without even realizing it, whether it’s pulling your purse a little closer to you when a black person sits next to you on the train or making a subtle judgment about a homeless person based on the color of their skin.

These routine acts of casual racial profiling are continuous with more overt acts of racial profiling in that they both contribute to the perpetuation of a culture in which non-white bodies are routinely criminalized. But white people like myself are much more likely to share a jaw-dropping account of the racial profiling of a celebrity and much less likely to post a Facebook status update about, for example, the constant stream of racial profiling that black and Hispanic people in particular face every day.

The same week as Watts was being detained, for example, researchers at Central Connecticut State University released a study showing that black drivers are twice as likely to be pulled over by law enforcement and twice as likely to have their cars searched even though white drivers are more likely to be carrying contraband items. And as the Center for Constitutional Rights notes in a 2012 report, the NYPD’s stop-and-frisk practices continue to disproportionately affect black and Latino pedestrians, particularly if they are lesbian, gay, bisexual, or transgender. For non-white people in America, racial profiling is a fact of life, not just a public spectacle.

When white people inordinately focus on high-profile incidents like the handcuffing of Danièle Watts, our outrage is certainly justified. But what we are doing, in part, is reassuring ourselves that we are fundamentally different from the eyewitness who reported her and the officer who questioned her. The uncomfortable truth is that the average white person may not be so different from that eyewitness after all. When stories like the Watts incident come up, then, it’s worth taking a moment to reflect on the ways in which our own subconscious biases shore up the racial profiling we see among law enforcement and to ask ourselves what we can do to reduce our complicity in that form of racism.

In the Internet era, white people are just starting to learn how widespread subconscious acts of racial profiling can be. Vine user Rashid Polo, for example, used the video-sharing service to document his experiences of “shopping while black,” a phrase commonly used to describe the experience of being followed through a store by an employee because they suspect you of shoplifting.

And a series of viral videos from the ABC News “What Would You Do?” segment with John Quinones have also helped to bring everyday acts of racism into public awareness. In one video, several people in a store fail to speak up when they witness a staged act of racial profiling. Those who do intervene are, notably, not white. In another popular segment, people in a park ignore a white boy trying to cut the chain off a locked bicycle but instantly swarm on a black boy doing the same thing. When a white woman appears to be stealing the bicycle, on the other hand, several passersby offer to help her.

Even if you’re the kind of white person who would check his or her assumptions before calling the police on a non-white person, you probably still make those assumptions in the first place whether you want to or not. Subconsciously perceiving non-white people as potential threats is an inevitable part of being white in a racist country like the United States, no matter how enlightened you believe you are. So if it seems like there’s a vast difference between you and a cop who engages in racial profiling, ask yourself what would happen if you weren’t able to check those subconscious assumptions, and you had a badge that gave you an unassailable sense of authority. Underneath their uniforms, after all, racist white cops are still racist white people.

What can white people do to reduce our complicity in this pervasive culture of racial profiling? Confronting your own racism is a necessary and lifelong struggle, but there is a quick way to quickly deflate your own subconscious assumptions when they arise. It’s called the “palette swap.” “Palette swap,” a term taken from video game development, refers to the practice of conserving resources by making in-game characters and objects identical except for their color. Luigi, for instance, was originally a palette swap for Mario: same shape, different color.

So the next time you catch yourself making a racist assumption about a non-white person in public, do a quick mental “palette swap” and think about how you might have reacted differently if that person were white instead. By making this palette swap, you can start up a productive internal dialogue. Ask yourself: Would you have made the same assumption? Why or why not? What stereotypes led you to make that assumption? Where did you learn them? What research can you do to clear those stereotypes out of your head?

For instance, if I were in a store and I suspected a black teenager in a hoodie of shoplifting, I could ask myself if I would have the same racist reaction if that teenager were white. I could then realize that I have been raised to be suspicious of black people in stores based on media depictions of shoplifting and popular stereotypes of black criminality. After I get home from the store, I can hop online do some research of my own, eventually finding this University of Florida study in which researchers monitored an Atlanta drug store and discovered that “blacks and Hispanics were no more likely than whites to steal merchandise.” Palette swap complete.

Use these “palette swap” moments as opportunities for self-education and as a way to train yourself out of the habit of participating in the sort of casual racial profiling that subtly reinforces the more drastic forms of racial profiling that we read about in the media. And before you click the “Share” button on the next big racial profiling story, turn that outrage inward and examine your own behavior, too.