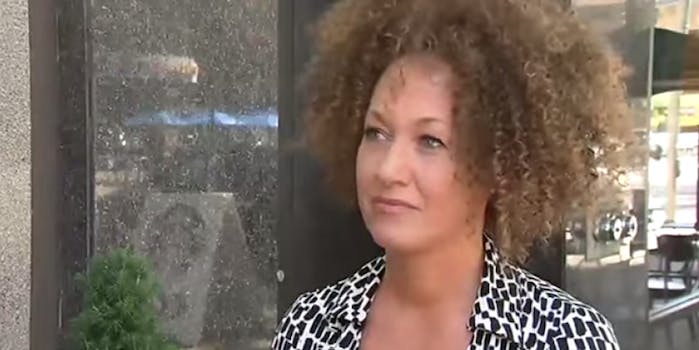 What Rachel Dolezal can teach us about being a white ally

This is not what working for justice looks like.

Rachel Dolezal must now wear the storied Scarlet “A”—an “a” for appropriating blackness. The now former NAACP leader has been publicly disgraced after her parents exposed her as a white woman pretending to be black. Dolezal has now resigned from her post as president of the NAACP’s Spokane chapter, igniting a widespread discussion on the Internet over the weekend about the controversy.

The whole situation was avoidable and unnecessary, speaking to the precarious position of so-called allies working from positions of power and privilege within marginalized communities. That a white woman like Dolezal felt compelled to appropriate black identity for the sake of doing racial justice work is, of course, a despicable act.

Regardless of intention, the aftermath of Dolezal’s act is also indicative of how some white allies don’t know how to participate without disrespecting and exploiting communities of color. We don’t know her side of the story just yet. But we do know that Dolezal played on the politics of passing by altering her appearance to that of a black woman, despite her upbringing and racial identity as a white woman.

Instead of engaging black people authentically, Dolezal’s appropriation of black womanhood may have come from a place of not wanting to constantly have her affinity with black communities questioned solely because of her whiteness. As a graduate of the historically black Howard University, she’s been down with anti-racist causes for a while—and could’ve still engaged in the same work as a white person.

For better or worse, though, sometimes white people encounter skepticism and some minor hostility when entering social and institutional spaces that black people created for themselves. It’s not because black people innately hate white folks (or engage in the farcical notion of “reverse racism”) but because black people have been failed by white people and white institutions for generations—so much so that they may question a white person’s motives when they engage black spaces.

On the whole, white people have the privilege of not having to be aware of their identity. They don’t have to be seen as the “Other” or as different while navigating daily life, because American society has been structured with whiteness as the default. When you’re born into that kind of comfort, as some might wonder, why abandon it for the sake of communing with black people in the midst of their racialized struggles?

But that’s where it’s up to white people to build trusting, authentic relationships with black people and learn about social and cultural contexts different from their own. Dolezal could’ve followed a similar course of action instead of pretending she was someone she can never be: a black woman.

It’s one thing for someone who’s clueless and hasn’t been well-educated in race relations to behave as Dolezal did, but for a woman like her to do so—with the anti-racism education to get allyship right—signals a deep-seated issue. It’s an issue that may relate moreso to how mainstream society treats white people who engage in social justice work.

Although many white people and non-black people of color been leaders within the NAACP, no one knows whether or not the Spokane, Washington, chapter’s members would’ve had questions about Dolezal’s participation as a white woman. But undoubtedly, as Quartz’s Morgan Jenkins argued, “A white NAACP president could have been a powerful thing.”

However, the questioning of intentions or legitimacy also operates in the other direction. A white person engaging anti-racism work may face ostracism from white peers who may deem them traitors or “self-hating,” all because they recognize the omnipresence of racism and actively work to resist it, even if it means being critical of whiteness.

In the process, there’s real risk of being cut off from friendships or support networks. It’s often an exploitation of the white guilt felt by many white Americans, a situation where guilt and shame about one’s privilege gets manipulated for the sake of closing ranks. For all we know, it’s a situation that could very well characterize the estrangement between Dolezal and her parents.

As Joan Walsh wrote at Salon 15 years ago, about her own struggles with white guilt:

I was a type, a stereotype even, and a walking paradox: a civil rights do-gooder motivated by racial animus against my group—in short, a self-hating white person. Not all Caucasians in the struggle are the same, but over the years I ran across a lot of me. And the fact that mixed-up white folk are the most likely to get involved with civil rights work results in a deformed political culture, one in which there is little white participation in our national conversation about race beyond the right-wing scapegoating of a Pat Buchanan and the masochistic piety of guilty Mumia cultists on the left.

Dolezal clearly has some serious soul-searching ahead of her, if she hasn’t done so already; she’ll need to dig deeper to understand how her personal struggles with whiteness have translated into her civil rights work. Still, dispelling any doubt about Dolezal’s efforts to date, the NAACP defended Dolezal’s work, noting that the Alaska-Oregon-Washington State Conference “stands behind” her advocacy record: “One’s racial identity is not a qualifying criteria or disqualifying standard for NAACP leadership.”

Indeed, there’s a rich legacy of white people being involved in organizations like the NAACP or advocating for anti-racist causes. That includes Eleanor Roosevelt, Gloria Steinem, Peggy McIntosh, and many others who have used their platforms and privileges as white people to guide their peers from ignorance and apathy towards empathy and action.

Whereas Dolezal could’ve been a formidable leader, the compulsion to lie about her identity distinguishes her from her white counterparts. Dolezal could’ve plausibly attained leadership in an organization like the NAACP while being known as the white woman she actually is—had she worked on building a reputation in her community built on trust, transparency, and the assurance that her purported white identity wouldn’t derail from much-needed work. But that didn’t happen.

Her big lie, a play-pretend that allegedly went on for several years, obscures what’s an otherwise commendable track record. According to Dolezal’s professor bio at Eastern Washington University, she’s not only taught courses on African-American history and culture, she’s also engaged human rights education and inclusivity work within schools, as well as community development efforts prior to her more recent work with the NAACP.

And as her father, Lawrence Dolezal, told the Washington Post, her portfolio of black-inspired art was so impressive that Howard University gave her a full-ride scholarship.

“You’ve got a white woman coming in that got a full-ride scholarship to the black Harvard,” Lawrence told the Post. “And ever since then she’s been involved in social justice advocacy for African Americans. She assimilated into that culture so strongly that that’s where she transferred her identity … but unfortunately, she is not ethnically by birth African American. She is our daughter by birth. And that’s the way it is.”

Still, much of the online chatter points toward a tendency for some to excuse Dolezal’s troublesome behavior. For example, R&B artist Keri Hilson tweeted that Dolezal is doing more than most black people do for themselves, while Cher wondered why Dolezal’s parents would do something so “cruel” as out their daughter as a cultural appropriator and alleged liar.

Let's just all thank #RachelDolezal. Identity, pathological, & parental issues aside, she's doing more than most of us do for ourselves.

WHY did Rachel Dolezal’s Parents OUT Their Daughter? It Was
Cruel.I Don’t Know WHY She Chose Her PATH,But Who Doesn’t Want 2 have Blk COOL
💖

Even as a white woman who masqueraded as black, Dolezal’s record differs greatly from the likes The View’s new co-host Raven-Symoné or actress Stacey Dash—two of many black public figures who are infamous for being incredibly tone-deaf when it comes to racial politics. Having black heritage alone doesn’t make someone an expert on matters of anti-black racism, but they can surely speak for themselves and their own personal experiences with the issue.

Dolezal seems to be well-educated about blackness in the academic sense, which makes her alleged act moreso deliberate than clueless. Of all white people, she should have known better. No amount of kinky hair, microbraids, or makeup trickery can ever substitute for experience, nor can any amount of cultural knowledge or formal education magically “achieve” blackness for a person with white ancestry, as MSNBC host Melissa Harris-Perry argued.

To work as an anti-racism educator and activist, Dolezal needs no disguise. Instead, the real Rachel Dolezal, as well as any other white people who wish to engage racial justice efforts, should show up as who they really are: as people seeking to work in solidarity and accountability with communities of color.

Derrick Clifton is the Deputy Opinion Editor for The Daily Dot and a New York-based journalist and speaker, primarily covering issues of identity, culture and social justice. Clifton is a graduate of Northwestern University.