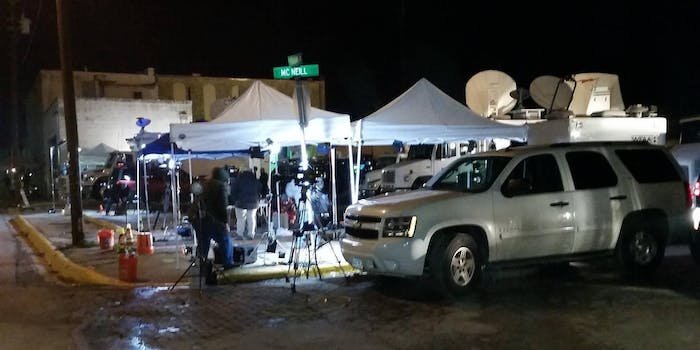 Outside the courthouse, everybody just seemed happy that the sloppy trial had finally ended.

The jury found Eddie Ray Routh guilty of the February 2013 murders of two men, including Chris Kyle, the U.S. Navy SEAL who rose to fame as the deadliest sniper in U.S. military history and the subject of the American Sniper book and blockbuster movie that followed.

For a trial with so much buzz, the scene outside the courthouse was nearly as still as the ice on the ground. Besides the fleet of news trucks, camera crews, on-air personalities, and producers, few spectators awaited the decision, save one small group of young people stood in front of the courthouse, holding an American flag.

One small group of young people stood in front of the courthouse, holding an American flag.

The subdued energy continued into the courtroom, according to a news crew member who told me that, via an earpiece piped into an audio feed in the courtroom, he’d heard that Judge Jason Cashon had strictly instructed that reactions be kept at bay following the verdict.

There was no circus. The crew member told me that not so much as a “sigh of relief” was audible as the guilty verdict was read.

After the verdict came, the mother of Chad Littlefield—the best friend of Kyle, who was slain alongside him at the Rough Creek Lodge shooting range on Feb 2, 2013, and who has sadly gotten the shaft with the trial being publicized as American Sniper-centric—spoke to the press through tears on the courthouse steps.

“We’ve waited for two years for God to get justice for us on behalf of our son,” said Judy Littlefield, “and as always God has proved to be faithful, and we’re so thrilled that we have the verdict that we have tonight.”

Police began removing the barricades blocking off the streets around the courthouse as people slowly filed out from the building, with many men in sport jackets and beige or black cowboy hats still milling around the lobby inside. One man asked another how he was doing.

“I’m going home!” he said, cheerily. These crews had been out here, day in and day out, for two weeks, and they were ready to hit the road. Nobody spoke amongst themselves about the verdict; talk was all focused on wrangling cables and lighting gear.

With the barricades down, a Volvo station wagon drove by, its windows rolled down and occupants cheering with glee at what they presumably felt was a great victory for American justice. A Chevy SUV drove by moments later, two smiling young girls inside, the passenger holding up an iPhone with a pink case to try to catch a good Facebook picture of the milling media that had descended on the quiet Texas town. Shortly after, they came back from the opposite direction to get a better angle.

It only took two hours and thirty minutes for the jury to return find Routh guilty. Why bother with an extensive deliberation? Eddie Ray Routh was a doper, and he’d killed two American heroes in cold blood, out of the sheer frustration that he’d never be as special as them.

That’s according to the prosecution, who had called experts to testify that “cannabis psychosis” is not only a very real threat, but can last up to three days. That was bad news for Routh, who was smoking weed with his uncle the morning of the shooting range murders, and who was, according to a jailer that testified on the stand, “detoxing” in the hours after being taken into custody.

Routh had told a Texas Ranger that he may have been smoking “wet” marijuana, and that marijuana in Texas is often dripped in formaldehyde. The claims are hard to believe. But if true, this laced weed would have given Routh the real-life effects of every nightmare LSD myth times 1,000. Regardless, psychosis induced by intoxication is a death blow to an insanity defense in the state of Texas.

“Cannabis psychosis” is not only a very real threat, but can last up to three days.

Those are interesting symptoms in the context of Routh, who, aside from the most obvious of those effects, was far skinnier in his confession video than he was in court (weight loss), was yawning in his confession video (fatigue), and had trouble remembering Littlefield’s name (memory problems). If those particular symptoms apply to his behavior in his confession video, almost all of the rest of them apply directly to his actions earlier that day, when his brain erratically decided that he needed to kill two men before they killed him.

You’d assume that someone would have demanded a blood test of Routh, a man who had just killed two men, who was prescribed the antipsychotic drug Risperdal during his stay at a VA hospital. It could have quickly helped the prosecution’s case by proving he was high on formaldehyde. And it could have bolstered the defense’s argument by showing what can happen to the brain of a person who fails to take their antipsychotic medicine. And if he had taken the medicine, the side effects of Risperdal—mental and mood changes (such as anxiety, restlessness), and neuroleptic malignant syndrome, which includes severe tiredness and confusion—can also have detrimental effects on the user.

But nobody ever administered one.

Instead, the defense spent time in court explaining that the marijuana pipe Routh and his uncle smoked the morning of the tragedy was, indeed, too small to get very high from. As for the rest, we’ll never know.

The trial over, I headed to the Rockin P Grill & Bar, across the tiny town square from the courthouse. Despite its large size, it was unmistakably a dive bar, with an array of pool tables in the back and an area where patrons could practicing lassoing a stool with horns on it. Everybody inside wore cowboy hats, and there were surprisingly few drinkers for the bar’s vicinity to a nationally televised trial. I approached the bar and ordered a whiskey and coke.

“Have you guys gotten a lot of traffic from the trial?” I asked the bartender. She thought for a second, and shook her head.

“No, not really. These are pretty much just our regulars in here.” The sole man sitting at the bar, an elderly man with a shaggy grey beard and Terrence Malick hat turned around to face me.

“They’re all scared to come in here!” he said, seeming quite a few drinks deep.

“Why are they scared to come in here?” I asked.

“Ah… they aren’t. They just… they come here from all over the world, and, this place… they’re all over at Greer’s,” the drunk man said.

“I drove here from Fort Worth, myself, to catch the verdict announcement. I’m surprised at how quiet things are.”

“Well… I think the verdict caught people off guard. It only took them two and half hours to reach the verdict, so I think a lot of people didn’t think it’d be coming so soon,” he said.

“Well, I guess the evidence was pretty clear,” I said, which was a statement that I didn’t believe. The man turned completely away from me and sipped his drink. I downed my whiskey and coke, thanked the bartender, and headed over to Greer’s on the other side of the square, where the man had said “they all” would be.

Greer’s Ranch Cafe, a classy BBQ joint with a full bar, was emptier than the Rockin P. The only diners, fewer than 10 of them, were confined to one corner of the restaurant. They all wore white dress shirts, ties, and big cowboy hats, and seemed to be participants in the trial that were sharing a few “it’s finally over,” post-verdict drinks. I made my way to the bar and asked for a Diet Coke to go.

The owner of Greer’s stood behind the bar, too, his arms folded and looking very tired. I asked him the same thing I’d asked the Rockin’s bartender: Had they seen a lot of traffic from the trial?

He nodded his head dramatically, emphasizing how exhausting the past two weeks had been. “Yes, we get them here.”

“Have you heard anybody talking about the verdict?”

“No… we haven’t had many people in here since then,” he said.

“It was announced pretty late, I expected them to sleep on it. It seems like something that could have caused quite a commotion,” I said.

“Maybe that’s why they did it late,” said the girl, chipper, handing me the Styrofoam cup. “So that it wouldn’t cause a mess.”

Whatever the verdict was going to be, Routh would still be spending the rest of his life in a cage. The most lethal sniper in American history had been killed by some off-kilter amateur. It was the modern equivalent of The Assassination of Jesse James by the Coward Robert Ford, a cosmically unjust demise for an American legend.

The most lethal sniper in American history had been killed by some off-kilter amateur.

On my way home, I drove by a Taco Bell, and I imagined Eddie Ray Routh, when he stopped through a Taco Bell drive-thru to order two bean burritos on his way back to his parents’ house, in Chris Kyle’s truck, an hour after killing him.

He was sane enough to get the munchies and stop by Taco Bell after the killings—that’s the crux of the prosecution’s case.

Sure—you have to be sane to buy burritos, in the truck of a man you’ve just killed, on your way back home, where cops are waiting for you. Why in the world would a madman ever do something like that?