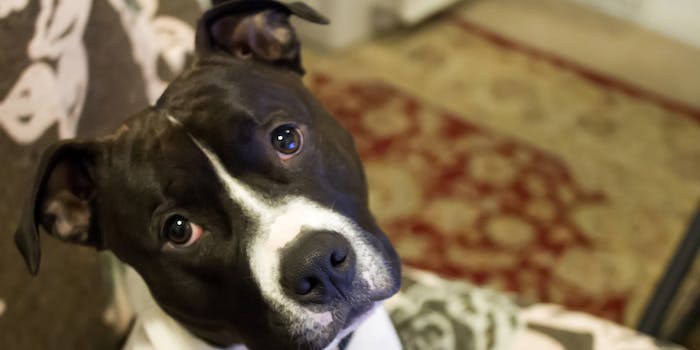 "He just a total weirdo."

This pit bull knows how to back that a** up.

Queso is a pit bull rescue who had a fear of walking through doorways. As owner Rhiannon Hamam explained on Reddit, he would avoid entering all of the rooms upstairs except her bedroom.

“We think he forces himself to enter our bedroom because we spend a lot of time there and he wants to join the party—the other rooms are only temporarily occupied so he just lets the fear dominate haha,” Hamam commented. “We don’t use invisible fences or any type of shock/vibrating collar. He’s just a total weirdo.”

As a way to fight his fear of certain doorways, Queso turns around and shuffles in backwards.

Hamam captured Queso in action on video, which was shared on Reddit’s r/videos. It has since collected more than 355,000 views and a few theories as to why Queso is skittish about certain doorways.

“This probably has something to do with the mirror positioned over the stairwell exactly on level with the opening of the door,” jrgreenie123 commented. “The dog has probably walked into the room before and looked over his shoulder to see what appears to be a different dog following him (he doesn’t realize that what he’s seeing is just a reflection of himself).”