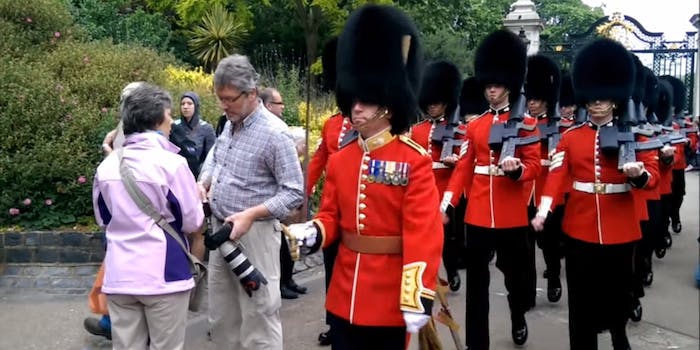 One pesky tourist is not going to stop the Queen's Guard.

The Queen’s Guard—those guys who stand outside Buckinham Palace wearing red uniforms and gigantic bearskin hats—are mostly known as a tourist attraction. This video proves that they can still be pretty intimidating.

One of the attractions of the Queen’s Guard is their relentless attention to ritualized military drills. People from all over the world visit the palace to watch the changing of the guard, and they delight in taking selfies next to stone-faced guards.

Here, we see guards trooping past a group of tourists… and basically mowing down one man who fails to get out of the way in time.

Nothing stops the Queen’s Guards when they’re on the march.