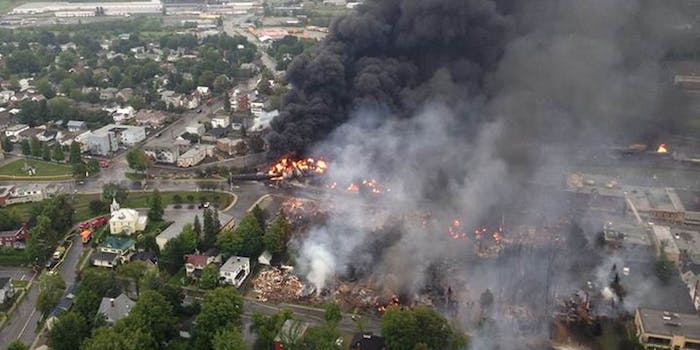 More than 50 residents remain unaccounted for after a train derailed near downtown Lac-Mégantic, Quebec, on Saturday.

The search continues for people missing in the small town of Lac-Mégantic, Quebec, where a train carrying crude oil crashed and exploded early Saturday morning. Now, as some evacuated residents prepare to return to their homes, people are turning to the Internet and Facebook to aid in that search, and two Quebec City women are organizing a crowdsourced list of the missing and found.

Shortly after 1 am Eastern Time Saturday, an eastbound Montreal, Maine and Atlantic Railway freight train that had been left unattended for the night, began to roll toward downtown Lac-Mégantic. When it reached the center of town, it derailed, and cars of crude oil caught fire, destroying much of the town center, including the library housing the city archives; the epicenter was near a group of popular bars. As of Tuesday, 13 bodies had been recovered from the site, but more than 50 people remain unaccounted for, according to CBC.ca.

The cause of the derailment is under investigation, but video shot by locals and posted to YouTube show the force and enormity of the wreck.

Just hours after hearing about the wreck, two women from Quebec who had never even been to the devastated town decided to lend a helping hand. Vicky Villeneuve and Maxime Gagnon Desbiens of Quebec City created www.supportlacmegantic.com and an associated Facebook page, as an online gathering place for friends and family still looking for loved ones. Villeneuve told the Canadian Press on Monday that even though she didn’t know anyone affected by the disaster, she wanted to help.

“We tried to make a page that was proactive, where people could go and verify quickly whether or not those they were looking for had been found,” she said.

Villeneuve said the website was filling a much-needed role, because there is no official list of who has survived the wreck or is still missing.

“We are giving the people the only resource they have right now,” she said.

The website initially included a list of those who were lost and found, but as of Monday evening, it had been scaled back to just those who had been found. The Facebook page included updates about those who had been found and ways for people to help the town on the long road ahead. Lac-Mégantic: Support aux gens has more than 27,000 likes, and similar page has more than 26,000 likes. As of Monday night, a informational Facebook page by the Provincial Police had gained nearly 15,000 likes.

Those seeking to make a monetary donation toward the town’s recovery efforts are encouraged to do so via the Canadian Red Cross.

UPDATE: Police have opened a criminal investigation into the crash. Investigators say they’ve ruled out terrorism.