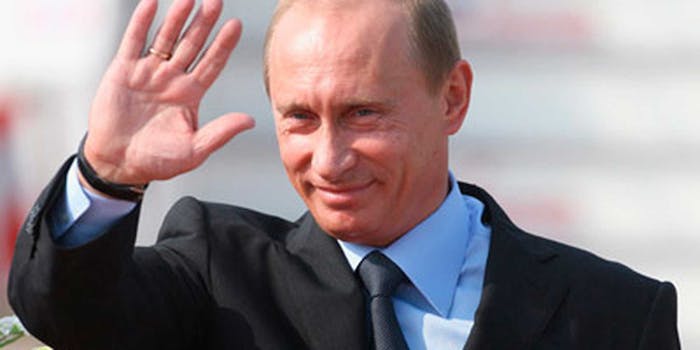 Putin’s New York Times op-ed: Where do you stand?

You probably haven't held a physical copy of the New York Times editorial page today, but there's little doubt you know what's in it.

You probably haven’t held a physical copy of the New York Times editorial page today, but there’s little doubt you know what’s in it.

Russian President Vladimir Putin made waves with a Thursday op-ed chastising America’s response to the Syrian crisis. In doing so, he criticises what he sees as President Barack Obama’s use of American exceptionalism to justify the circumvention of international law.

“I would rather disagree with a case (Obama) made on American exceptionalism, stating that the United States’ policy is ‘what makes America different. It’s what makes us exceptional,'” Putin wrote. “It is extremely dangerous to encourage people to see themselves as exceptional, whatever the motivation.”

Putin, whose country has been the largest and most influential backer of embattled Syrian President Bashar al-Assad, used his op-ed to publicly criticize the Obama administration for having pushed so hard for military action in Syria despite a lack of support from both foreign allies and the American people. Comparing a potential attack in Syria to the American wars in Iraq and Afghanistan, Putin argued that military action would cause more harm than good, spreading the conflict beyond Syria’s borders and destabilizing the entire region.

At the same time, Putin stroked his own ego, praising Russia’s internationally welcomed plan to voluntarily disarm Syria of its chemical weapons, potentially avoiding a U.S. led military operation. He argued that his plan would help preserve the authority of international law.

“No one wants the United Nations to suffer the fate of the League of Nations, which collapsed because it lacked real leverage,” he wrote. “This is possible if influential countries bypass the United Nations and take military action without Security Council authorization.”

Although there was once a time when the audience for an op-ed like this would have been contained to New York Times subscribers, thanks to the internet the column was stirring conversation and making headlines around the country and the world. Commentators were divided not only about the article’s content, but also the Times decision to publish it in the first place.

Supporters saw the message as a stirring call for international cooperation and end to U.S. interventionism.

Wow. An amazing up-ed in Thurs NY Times by Vladamir Putin. He wonders about our love of democracy, equality and God: https://t.co/FyGDACqqj2

But many detractors found fault with the simplicity and convenience of Putin painting himself as the champion of international law and human rights.

Haven’t read Putin’s op-ed yet. Assume he apologizes for all his anti-LGBT stuff?

Others called it plainly hypocritical. Sen. Bob Menendez (D-N.J.) said he worries when “someone who came up to the KGB tells us what is in our national interests and what is not.”

Some even labeled Putin’s op-ed as trolling at the highest diplomatic levels. Pascal-Emmanuel Gobry, writing for the Kernel, called Putin the King of the Trolls in a piece dissecting the op-ed and varied reactions to it. Like all good acts of trolling, he said, the article worked because it had a kernal of truth to it. Gobry said Putin was able to get the reaction he wanted by making the op-ed really a critique on American exceptionalism rather than the United States’ policy on Syria.

This is great, because it is a perfect example an old, extremely effective standby of external Soviet propaganda, which was to exploit political contradictions within an adversary country in order to weaken it. Many in the US elite reject the idea that America is an exceptional nation, and with that the role of benevolent superpower that America has played for the world over the past 20 years, a role that marginalizes Russia.

By siding with these people, Putin makes the debate about ‘exceptionalism’, and no longer about Syria or anything else, and strengthens their hand.