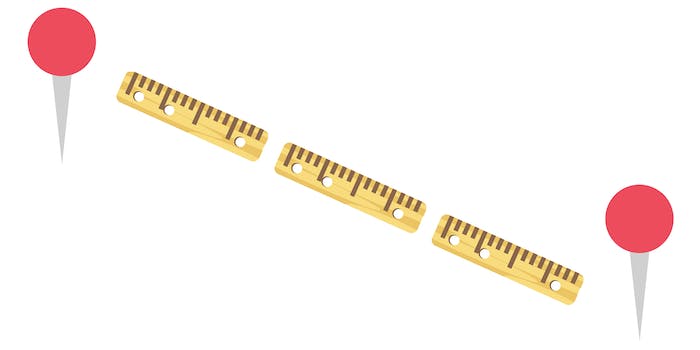 A two minute walk can make all the difference in the world!

Human nature is, more often than not, all too predicable. No matter how much we like to tell ourselves that we’ve got it together, old habits come creeping back in, and unfortunately they die hard. Want to quit smoking? Cut back on sugar? Whatever the case, good luck because our dumb human brains are wired to actively sabotage us.

But while we may consistently not live up to our own best expectations, at least now there’s a meme that can make light of the fact.

The “distance meme,” for lack of a better name, has people poking fun at themselves by demonstrating how long it takes to arrive at a foregone conclusion with three ruler emojis laid out between two red pushpin emojis. Typically, the meme starts out with someone saying “me: I’m FAR from [fill in the blank]” followed by a short, usually two minute walk to that exact thing—as you can see in the handful of examples below:

A few people in the LGBTQ community put the meme to use to joke about their once-closeted sexuality:

me in middle school: i’m FAR from gay

Others are using the meme to put entire groups of people on blast. Some users are shaming men in general, or racist white people who claim not to be racist:

Then there’s this super-specific one that calls out the University of Iowa over the school’s apparently very chillax underage drinking policies:

Of course, someone else used the meme to make an inevitable joke about the song “I’m Gonna Be (500 Miles)” by the Scottish pop duo The Proclaimers:

distance I’m willing to walk for you:

And hey, going by the lyrics to that song, at least The Proclaimers seem to have it figured out anyway, as far as who they’re waking up next to, getting drunk and “havering” with—whatever that means since most of us still have no clue some 25 years later.