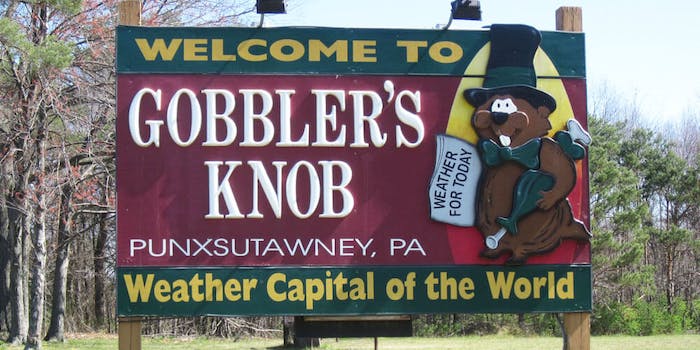 PETA is still calling for an animatronic Punxsutawney Phil

'Why would they make a movie about it all if we did something wrong?'

With Groundhog Day approaching on this coming Sunday, the folks over at PETA are engaging in a little tradition of their own. Namely, pestering the Punxsutawney Groundhog Club to retire Punxsutawney Phil and replace the animal with an animatronic groundhog.

The plea from the animal rights organization dates back to at least 2010. But because the lowes- hanging fruit is also the most delicious, they’re still at it a decade later.

“As a prey species, groundhogs actively avoid humans,” Newkirk writes. “Being in close proximity to the public causes these animals great stress. When Phil is dragged out of his hole and held up to flashing lights and crowds, he has no idea what’s happening. Being relegated to a library ‘habitat’ for the other days of the year doesn’t allow him or the other groundhog there to dig, burrow, or forage. It’s no kind of life for these animals.”

Counterpoint: groundhogs are also nuisance pests due to the fact that their burrows can cause extensive damage to home yards and gardens, farms, and fields—potentially injuring horses and other large farm animals. Also, they’re mean and they bite. So maybe one less groundhog on the streets the better?

At any rate, Newkirk continued to make her point.

“By creating an AI, you could keep Punxsutawney Phil at the center of Groundhog Day but in a much more progressive way,” she adds. “Talk about taking your town’s annual tradition in a fresh and innovative direction! Today’s young people are born into a world of terabytes, and to them, watching a nocturnal rodent being pulled from a fake hole isn’t even worthy of a text message.”

But watching a fake groundhog being pulled from a fake hole would warrant a text message? Who are we to say what excites the youths of today!

Deeley later responded to Newkirk in a statement of his own, defending Punxsutawney Phil.

“For 134 years, we’ve done something right to keep attracting people and keep them coming,” Deeley told The Washington Post. “Why would they make a movie about it all if we did something wrong?”

To be perfectly fair, this is also not the best argument—as many forms of art don’t exactly hold up in a politically correct way, decades later.

“There has to be something that’s bringing people to this community year after year,” Deeley continued. “I’ve never had a kid walk out or see a mother say, ‘That groundhog is terrible.'”

Tens of thousands of visitors come to witness Punxsutawney Phil predict whether or not we’ll have six more weeks of winter every year. But as far as we know, no one has ever called him “terrible” before.