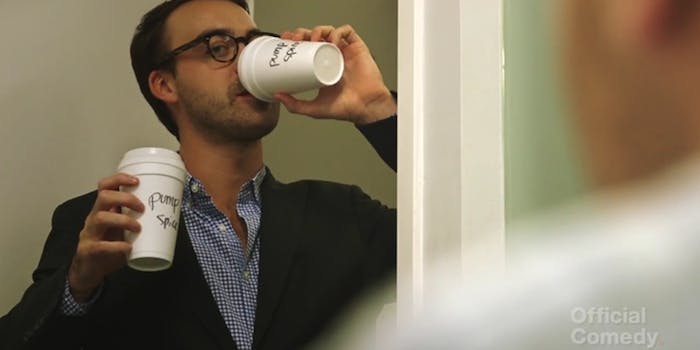 ‘Pumpkin Spice: The Movie’ turns our nightmares into reality

In a world where pumpkin lattes are everywhere, one man decides to take back the spice.

As summer turns to fall, it’s time to remember one of the season’s more insidious trends: pumpkin spice. It’s in our lattes, our breakfast foods, our beers. Everytime we give in to the frothy, sugary temptation and become a human Cathy cartoon, we hate ourselves. Never again, we say. Pumpkin’s not even that good, we say. I can’t feel my right arm, we say.

The spiceheads at YouTube’s Official Comedy page decided to make an epic trailer for the movie that’s playing in our heads every time we pass a Starbucks and, now, even McDonald’s. It’s called Pumpkin Spice: The Movie, and it plays out like your typical a-prophecy-was-told-type action movie, with one man questioning why pumpkin’s in everything, while everyone around him seems oblivious to the nefarious seeds being planted by subtle marketing, their brains under the control of the “spice.”

When our protagonist meets a mysterious pumpkin spice scholar at a bar, he sees behind the curtain. The man tells him the ancient truth:

“White people are going to love it.”