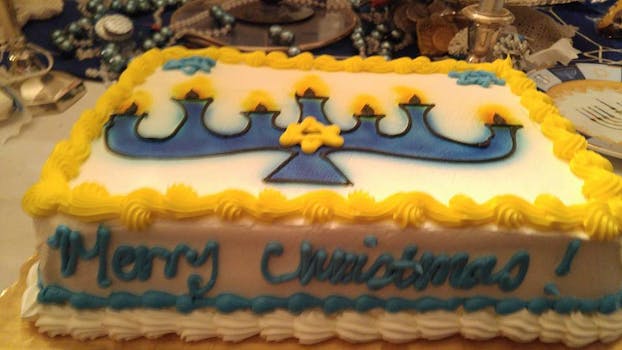 What's wrong with this picture?

As Hanukkah cakes go, this one from a Publix in Georgia is decidedly half-baked.

Ben Altman posted a photo of this Hanukkah cake on Facebook Tuesday, along with a quote from his brother: “This is what happens when you order a cake for a Hannukah [sic] party in Thomasville, GA.”

At first glance, it’s pretty close, right? It’s the traditional colors of blue and white, there’s a menorah, it’s got some Stars of David… Wrong. The menorah has spots for seven candles, not nine (eight plus the shamash to light the others). They’re all haphazardly placed instead of having one higher than the others. Oh, and then there’s that little detail of it saying “Merry Christmas” down one side of the cake. It’s like something straight out of Cake Wrecks.

Despite the grocery chain’s best attempts to remain holiday-agnostic throughout December, a handful of its posts betray its Christian-leaning sensibilities, from “Santa paws” stockings to Christmas decor and its “closed on Christmas” post. The regional brand that started in Florida and now has stores in six states has not publixly publicly commented on the cake incident.

It’s not the first occurrence of a troubling cake snafu in 2016 either: Whole Foods went viral in April after a pastor claimed (and then retracted said claim) that a bakery worker sold him a cake with a homophobic slur. Ditto for Albertson’s after a customer claimed the store wouldn’t sell her a Trump 2016 cake in September. And of course, no one should forget the Florida cop who texted a woman this photo of a “Sorry I Tased you” cake.

Can America improve its sordid relationship with baked goods in 2017? Piece of cake.