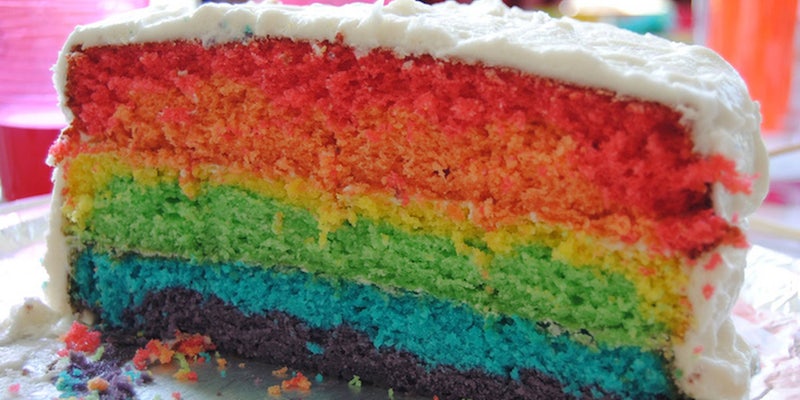 Whole Foods has denied any wrongdoing.

An openly gay pastor in Austin, Texas, has filed a lawsuit for “intentional infliction of emotional distress” against Whole Foods after a cake he ordered allegedly arrived with the phrase “Love Wins Fag” written on it in blue icing.

Pastor Jordan Brown said he ordered the cake from a local Whole Foods on Thursday, requesting that the cake read “Love Wins.” But it wasn’t until he got into his car, said Brown, that he noticed the homophobic slur.

“It was just so humiliating and offensive. When I called the manager I was literally crying,” Brown told the Daily Dot.

On Monday Brown took to Twitter to announced a press conference—and posted a picture of the offending cake.

Brown is the pastor of the Church of Open Doors in Austin: a non-denominational, LGBT-friendly church. He said the cake was ordered for a member of his church.

He said that when he put in the order for his cake, a young Caucasian woman in her early 20s “snickered” at his request for the phrase. He didn’t think much of it, he said, but when he returned to pick up the cake Brown said he saw the same girl finalizing the details on his cake. When he discovered the slur on the cake after driving away, he couldn’t believe a company he supported so frequently would do something like this.

“I am a huge Whole Foods fan. I eat there at least four times a week. I have ordered at least five cakes from them within the last year. I’ve never had problem. It’s always perfect,” Brown said.

In a video posted by Brown’s attorneys at the Kaplan Law Firm, he displayed the box and receipt and said that the box was still sealed.

Immediately discovering the cake, Brown called the corporate office leaving an “emotional” voicemail. He then called the store where he bought the cake to speak to the manager. Brown said the store manager was initially apologetic when he called.

“He said whoever did this will no longer be working here. He said he would do whatever it takes to make this right,” Brown said.

The manager offered a gift card to replace the cake but Brown refused, saying he didn’t want this to ever happen at another Whole Foods. The manager then told Brown he would call him in two hours. When Brown got the call later that day he said the manager’s apologetic tone was gone.

“His demeanor had completely changed. He said we’re not responsible and we didn’t do it. … And then he hung up on me,” Brown said.

Attorney Austin Kaplan told the Daily Dot that they decided to file a lawsuit after trying to reach the Whole Foods corporate office for three days without any response. Kaplan also said he sent a separate letter to Whole Foods’ legal department on Friday requesting that they contact him.

“I said this is serious. I attached the picture and I explained the situation in detail and I said we need to talk by Monday at 10am,” Kaplan told the Daily Dot.

They never heard from anyone and filed the lawsuit a few hours after the proposed deadline. Kaplan said that a Whole Foods lawyer finally reached out late Monday.

For its part, Whole Foods responded to the allegations in an official statement that denied any employee wrongdoing.

JUST IN: Here's statement from @WholeFoods on the "Love Wins" cake. (too long to tweet) pic.twitter.com/D0v637i1Wm

“The team member wrote ‘Love Wins’ at the top of the cake as requested by the guest and that’s exactly how the cake was packaged and sold at the store,” read the Whole Foods statement. “Our team members do not accept or design bakery orders that include language or images that are offensive. Whole Foods Market has a zero tolerance policy for discrimination.”

Kaplan said he and his client are “100 percent” willing and ready to go to trial. He also said allegations that his client doctored the cake are bogus.

“I can tell you that [Brown] is not a cake baker, he’s not much of a cook and he doesn’t have blue icing in his house. So I don’t know how he could have done this.” Kaplan said.

Both Kaplan and Brown hope this will force Whole Foods to look at its training policies and have more employee oversight.

Brown said even though this experience has caused him a lot of pain and anguish, he hopes it will lead to an outcome that will help other gay people around the country.

“Honestly, it’s to bring awareness to the LGBT community that incidents like this cannot happen,” Brown said.

The manager at the South Austin Whole Foods where the alleged incident took place could not be reached for comment. A store employee told the Daily Dot that its bakery was not taking phone calls on Monday.

Update 6:42pm CT, April 18: This post has been edited for clarity and context—and updated with comment from Kaplan, Brown.

Update 2:57pm CT, April 19: Whole Foods on Tuesday said it plans to take legal action against Brown, accusing him of fabricating his accusation. Whole Foods has released security footage that the grocery chain said shows a disparity in the cake’s labeling upon its sale.