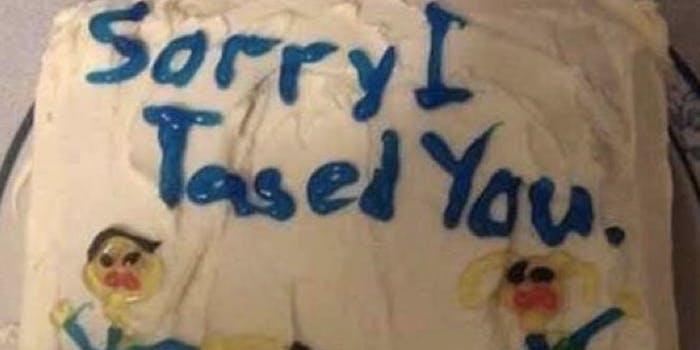 A Florida woman is suing a former sheriff’s deputy for allegedly zapping her in the chest with his stun gun and then tried to apologize by texting her a photo of a “Sorry I Tased You” cake.

The Escambia County deputy, Michael Wohlers, allegedly came to the woman’s place of business in July 2015 to pry into her personal life, the Pensacola News-Journal reported.  Her lawsuit claims he grabbed the tea she was drinking, and when she reached for it, he discharged his stun gun into her chest. After she fell to the ground, she says, he kneeled on her, removed the taser prods, and left.

That’s pretty much what’s going on in the stick-figure cake, which shows two wires running from an angry aggressor to the distraught-looking victim (the facial expressions might be unintentional and the cake decorations leave much to be desired).

Here’s a photo of the sad cake, entered as an exhibit in the lawsuit:

Wohlers denied all the allegations through his attorney, according to the PNJ, but resigned from the sheriff’s office less than a month after the alleged attack. As of Monday, he’s under a one-year ban from working at any Florida law enforcement agency.

As for the cake, it’s not clear what happened to it. The photo comes from a text message Wohlers allegedly sent the woman, saying he had baked the cake and wanted to deliver it. She doesn’t appear to have accepted the gift.

Guess it’s time for a “Sorry I Baked You a ‘Sorry I Tased You’ Cake Cake.”

Update 5:54pm CT Sept. 30: Turns out Wohlers had only found the photo of the cake online, meaning this “Sorry I Tased You” cake came from somewhere else.

As Gizmodo reports, Barnstable, Massachusetts police officer Jay Maloney was responsible for baking the cake for his coworker, whom he accidentally tased while they were responding to a domestic dispute during the wee hours of New Year’s Day 2014.

It’s anyone’s guess if Wohlers actually baked a cake in the first place. As for officer Katie Ross, who received the legitimate, original “Sorry I Tased You” cake, she’s doing fine and completely forgives Maloney.