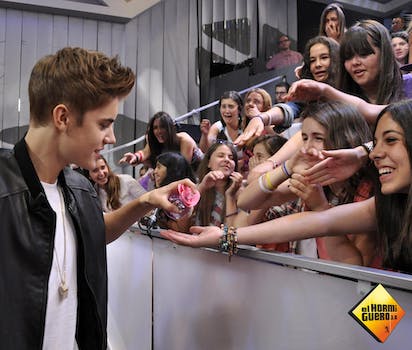 If you’re as tired of Justin Bieber as most people are by now, then you’re not going to be happy with Comedy Central Roast this week. Yesterday, the official word broke that the Canadian pop star will be the next victim of the Comedy Central Roast series. “For years I have wanted Comedy Central to roast me,” Bieber tweeted. “They said only if I provided them w/ more material so for a year now I have worked hard.”

“Wait a minute,” you’re probably saying. “This is a good thing, right? Justin Bieber is awful, and he deserves to have the crap roasted out of him.” And that’s definitely a fair point. Sadly though, the Comedy Central Roast of Justin Bieber isn’t good news, for Bieber or anybody else. Not only because we don’t need a roast celebrating an annoying tabloid fixture like Justin Bieber, but because after the last few editions, we don’t need Comedy Central Roasts at all.

Roasts have always been an indelible part of American comedy, as being roasted meant you had done something truly special. It was a commemoration of one’s career, filtered through a cheerful ribbing by a group of your friends and peers.

It is true that roasts have always been an indelible part of American comedy, as being roasted meant you had done something truly special. It was a commemoration of one’s career, filtered through a cheerful ribbing by a group of your friends and peers. This was most evident in the classic Friars Club roasts of the ‘50s, ‘60s, and ‘70s, where megastars of the day like Johnny Carson were always on hand.

The yearly Comedy Central Roast, however, has turned the form into its own unstoppable beast. Though the annual broadcast was connected the Friars Club up until 2002, things started to change when Comedy Central broke away to do its own thing. Occasionally, people who know the actual roastees are still featured, but more often than not, the show has become about bringing together groups of random celebrities and comedians who Comedy Central thinks can deliver the best ratings as well as the harshest jabs. At their best, the roasts have exposed upcoming comics like Anthony Jeselnik, Whitney Cummings, and Amy Schumer to a wider audience. More notoriously though, comedians like Jeff Ross and Lisa Lampanelli made household names of themselves largely based on their place as staples at these events, and their brutal approaches to taking down the guest of honor.

Granted, there have always been insult comics; the legendary Don Rickles, for instance, is famous for his off-color barbs. Perhaps then, the issue is that as a culture, we’ve become a lot more aware of a changing culture in comedy. Though white men generally remain at the top of the food chain, there are as many or more female and minority comics who are dominating their field right now, which makes the very concept of the old-school Friars Club roasts (i.e., a bunch of old white dudes busting each others chops) a relic of the past.

Is there any rotten apple lower to the ground than Justin Bieber?

However, the main problem with the Comedy Central Roasts has been the way in which they choose the guest of honor. It seems that over the past few years, the selection process has been based more on who has the most to make fun of in their personal history than who is truly deserving of the “honor.” For every legend like Roseanne Barr and William Shatner, they’ve picked a product of America’s obsession with celebrity trainwrecks, such as Charlie Sheen and David Hasselhoff. This is also likely the reason why they brought Seth MacFarlane back as roastmaster three times: He’s not someone who minds taking potshots or chopping down low-hanging fruit. And is there any rotten apple lower to the ground than Justin Bieber?

The Comedy Central Roasts’ frequent tendency to attempt to take their subjects down a peg, no matter who they are, is also inherently unsettling. The late Joan Rivers (who was not exactly shy about roasting others herself) discussed this in her documentary Joan Rivers: A Piece of Work, where she expressed doubts about participating as the honoree of the 2009 edition.

For a moment, this looked poised to change, when James Franco was picked to be the man of the night at the most recent Comedy Central Roast in 2013. Not so much because Franco was a particularly likable candidate, but because despite his worst instincts, he’s a legitimate celebrity who has at least made some interesting choices throughout his career. And Comedy Central ended up bringing in Franco’s real life friend, Seth Rogen, to host the evening.

Yet in the end, Franco’s roast turned out to be just as frustratingly offensive as usual. It didn’t matter if his friends were there or not, or if Franco has done a few things in his career actually worth honoring. The night was just a bunch of gay jokes, comedians trying to top each other to say the “most shocking thing.” It all gets pretty boring after awhile.

In her excellent 2011 essay collection, Is Everyone Hanging Out Without Me? (And Other Concerns), Mindy Kaling exquisitely describes why this method of roasting is so unfunny.

It’s a real shame, because I think creative, funny, even merciless teasing is one of the greatest ways to bring people together… What I do appreciate about the Friars Club roasts is that when, say, Freddie Prinze roasted Sammy Davis Jr., it seemed like (a) they actually knew each other, and (b) the other people roasting weren’t professional insulters. They had other careers, as comedians, actors, politicians. This was just something they did well, from time to time. And it was affectionate… I have no need to hear people tearing into Lisa Lampanelli for liking to have sex with black men… I’m sad that making it in comedy is writing hateful stuff about total strangers… I also did not want to see photos of Osama Bin Laden’s dead body. I think the two things are related.

While James Franco his more than his share of haters, nearly everyone in the audience will agree Justin Bieber is terrible, and Bieber’s oeuvre of awfulness is also probably why Comedy Central decided he would be a great roast candidate. He’s so easy to make fun of that the jokes practically write themselves, but there really isn’t anything funny about Bieber’s worst exploits. From relieving himself in a mop bucket to breaking the law and getting away with racism with just a slap on the wrist from his fans, his behavior isn’t hilarious. It’s everything wrong with celebrity culture today.

“Honoring” him with a roast is really just a way of validating his bad behavior, and potentially a good PR strategy for someone who wants to show they’re “in” on the joke. Bieber gets it.

Justin Bieber should be mercilessly mocked, as demonstrated by Kate McKinnon’s fantastic Saturday Night Live sketch last week. However, “honoring” him with a roast is really just a way of validating his bad behavior, and potentially a good PR strategy for someone who wants to show they’re “in” on the joke. Bieber gets it. This is also why Justin Bieber’s Between Two Ferns interview is less interesting that most. The program relishes in the self-aware mockery between Zach Galifianakis and his guests, but with Bieber’s guest spot, the proceedings felt like an excuse to get traffic, instead of telling actual jokes. Based on his own tweets regarding the announcement, he doesn’t appear that troubled by his actions. He doesn’t “get it,” even if Zach Galifianakis and half the insult comics in America mean to prove otherwise.

Will a bunch of racist and sexist jokes do anything to change Bieber’s rampant cultural appropriation, his disregard for his own fans, or his overall bad behavior? No, it won’t. At the end of the night, we’ll simply have suffered through a bunch of pointless jabs just to have Bieber keep on being Bieber. Because it doesn’t ultimately matter who the target of the Comedy Central Roast is, the end goal is always to push the boundaries of good taste, and Bieber has already accomplished that without any help from Comedy Central.