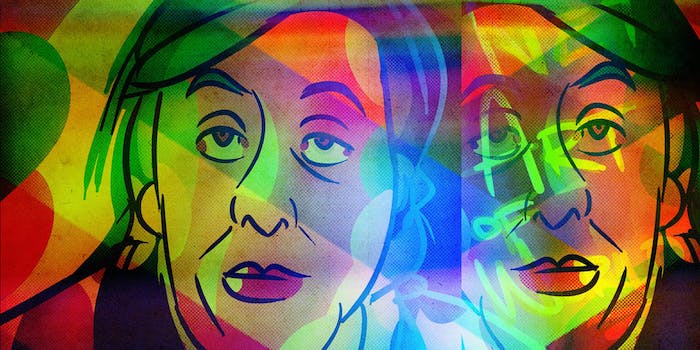 The Internet simply needs to do better.

Earlier this week, the staff of popular feminist blog Jezebel posted a note to their readers entitled “We Have a Rape Gif Problem and Gawker Media Won’t Do Anything About It.”

But it wasn’t just the commenting system they took aim at, it was Gawker Media’s inefficiency at addressing the problem, despite repeated complaints from members of both Jezebel and other Gawker Media sites staffers—the exact people who have to remove the offending comments from their own posts.

In the immediate aftermath, Gawker Media editorial director Joel Johnson offered up a tepid response, promising to find a solution. As expected, the ongoing debate about the Internet and its noted hostility towards women once again reared its head.

While there’s no metric that can accurately measure just who bears the brunt of the worst comments, many bloggers, both male and female, can attest to the fact that it’s often female writers who attract violent and hypersexualized vitriol, rather than just non-gendered ire.

Just days prior to the Jezebel memo, Guardian columnist Helen Lewis argued not only for ways to make the Internet more welcoming to women, but also more hostile to Internet trolls. In the days shortly after, the Guardian’s Reader’s Editor Chris Elliott openly discussed the growing backlash commenters were putting forth in response to the paper’s ever-increasing coverage of feminist issues, perfectly underscoring the exact point Lewis was earlier making.

But facing commenter backlash isn’t the only issue women on the Internet face—it’s balancing precariously on the tightrope between choosing which battles to pick, when to stand up for themselves, and when to take it on the chin as an occupational hazard.

I spoke with one female sportswriter, who prefered to remain anonymous, on the issue. “I’ve been in the position of having readers and colleagues express outrage on my behalf about comments they deemed ‘abusive’ by using a report or delete function,” she told me. “I appreciate that they feel protective of me, but it also irks me when people white knight like that. I worry that if every untoward comment gets reported, when something truly threatening occurs it will be so much more likely that the powers that be will ignore or dismiss it as just another rude comment.”

Female writers dealing with commenters are permanently living in between a rock and a hard place at this point: complain and some asshole will point out that male authors face commenter firing squads as well. Respond and invite even further backlash. Suck it up, and well, your therapist bills can tell their own story.

In “Why Women Aren’t Welcome on the Internet,” PS Mag’s Amanda Hess put it plainly: “Women who are harassed online are expected to either get over ourselves or feel flattered in response to the threats made against us. We have the choice to keep quiet or respond ‘gleefully.’”

We’ve reached a point where it feels as if we’ve been discussing feminism and the internet ad infinitum, but as our anonymous sportswriter pointed out, getting the powers that be to pay attention is a whole separate landmine.

A company like Gawker Media prides itself on the level of discussion engendered in its comments sections, which arguably, can only happen as openly as possible due to the ability for users to cloak themselves in anonymous handles and untraceable burner accounts. Some sites, such as BuzzFeed and Grantland, require Facebook credentials (or email) from commenters, which leads to a more civilized discussion group when a real name and face is attached to the words.

However, these practices are somewhat akin to telling a woman she shouldn’t dress scantily if she doesn’t want to get raped—it might offer a temporary victory, but it sure doesn’t fix the problem at hand. And in this case, the real issue is that media companies just aren’t doing enough to protect their writers, particularly the female ones.

When these authors, the ones who mine their personal lives to share their opinions, are the same ones forced to moderate and sanitize the comments sections on their work, staring down the barrel of the vitriol shotgun, things get tricky. Especially when it’s not a one-off comment, but a ceaseless barrage of spam, pornography, rape, and death threats, along with just the general anger.

An Atlantic piece on misogyny ruining journalism for women put it this way: “To really understand how it feels to read these missives (to the extent that someone other than the intended recipient can even begin to understand), it’s necessary to experience their regularity. Instead of a lone jerk heckling you as you walk down a major street, imagine dozens of different people channeling the same hyper-aggressive hatefulness, popping up repeatedly on random blocks for hours on end. That’s what some bloggers had to endure over the course of years to make it.”

There are myriad solutions for editorial organizations to deal with the commenting problem: the Nieman Lab suggests that moderated comment sections are the answer, though once again that often results in putting the task upon the shoulders of the author. Facebook transparency is one route, but lost is the frank discussion that would perhaps exist otherwise. Logging IP addresses, even for burner accounts, and banning violators offers a seemingly better fix.

Regardless of the route taken, the fact remains that publications simply need to do better. It’s easy to dismiss online comments as the work of trolls, and suggest a “rise above” attitude, but in any other industry, the onslaught of comments that make these writers not want to keep doing what they do would constitute as nothing less than harassment.

As Hess wrote in her PS Mag article, while citing a paper from the Boston University Law Review, “Anonymous online harassment…similarly discourages women from ‘writing and earning a living online’ on the basis of their gender. ‘It interferes with their professional lives. It raises their vulnerability to offline sexual violence. It brands them as incompetent workers and inferior sexual objects. The harassment causes considerable emotional distress.’”

In the aftermath of the Jezebel open letter, after temporarily disabling image uploads in comments, Gawker Media re-introduced the pending comment system, a system which allows only comments from approved commenters to be automatically visible, while leaving all other comments in a pending queue until approved—able to be seen, but only by choice.

As a current internet writer and former Gawker Media employee, I’m tentatively optimistic. While it is a change, lots of good comments come from new, and thus unapproved, commenters, which makes a wade into the pending section inevitable, once again exposing authors to the filth they were hoping to avoid in the process.

Women and the internet still have a long way to go, even just in the battle of to not be disenfranchised while speaking up. (BuzzFeed, when reporting on the Jezebel/Gawker situation, impressively sidestepped the feminism issue, instead painting the story as “Gawker Media Staffers Are Still Ambivalent About Kinja.”)

But to really affect change, it has to come from the top down. Weeding out the trolls and overhauling comments systems isn’t enough, a strong and proactive stance, rather than a reactive response, is what’s needed to make writers feel safe, welcome, and above all, heard—not just by their readers, but by the people they work for as well.