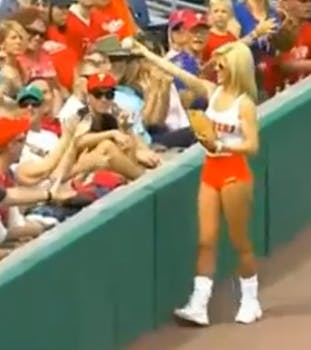 Who is Priscilla, the YouTube-famous Hooters ballgirl?

15 minutes of fame is all that Priscilla the Hooters Ballgirl wants out of her fateful foil with a fair ball.

15 minutes of fame is all that Priscilla the Hooters Ballgirl wants out of her fateful foil with a fair ball.

The blonde Floridian, who fielded a fair ball that rolled into foul territory during yesterday’s Sunday’s Phillies-Rays spring training game and proceeded to hand the ball over to a young fan, has spent the past 24 hours declining interviews. Perhaps she’s happy with her current place at the bottom of the pop culture pole.

Priscilla, who serves up chicken wings at the original Hooters location in Clearwater, Fla., has been the talk of the Internet town since breaking up the flow of Sunday’s spring training game, earning more than 100,000 views on YouTube in less than 24 hours.

Not all that attention’s come at the expense of her Hooters outfit, however. As it turns out, some eyewitnesses were rather taken aback by the way she actually fielded the ground ball.

The Daily Dot asked Priscilla’s morning manager if her skills around the beer taps and Mexicurley Fries were anything like the way that Maddon described her on-field awareness, and he sent us to corporate, who did not return our calls.

Because of that, we can’t exactly confirm Priscilla’s identity, but a quick Facebook search reveals there’s one Priscilla who works at the Clearwater Hooters: a Saint Cloud, Fla., native named Priscilla Daughtry, who has very similar-looking blonde hair, eyebrows, smile, and footwork (we assume) that would make a Major League manager blush.

No word yet on whether or not Priscilla will at least try to parlay her highlight reel into a spot on the Hooters city softball team. If it happens, someone may need to teach her the difference between fair and foul.