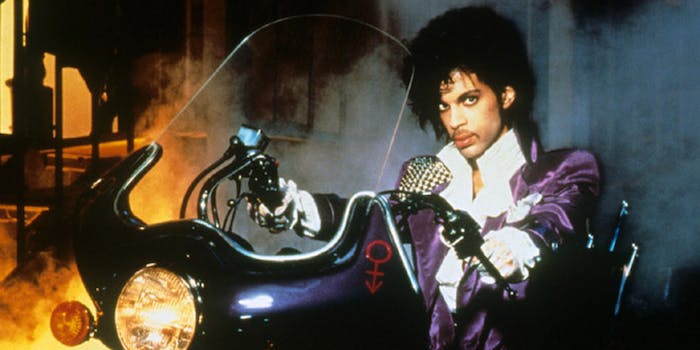 Prince has never really “got” the Internet. In a notorious 2010 interview, he declared the Internet “over,” remarking “all these computers and digital gadgets are no good. They just fill your head with numbers and that can’t be good for you.” But now, it looks like Prince may be about to embrace the Internet in a big way.

In an interview with The Minnesota Star Tribune, Prince discussed tracks from his forthcoming album. One song, “This Could Be Us,” is apparently inspired by a meme. According to Prince, he enjoyed the #ThisCouldBeUsButYouPlayin meme so much that he named a ballad after it.

The specific image that set Prince’s creative juices flowing comes from his 1984 film Purple Rain. Evidently, Prince enjoyed seeing a still from his film used as a backdrop for a meme. And in case you’re in any doubt that Prince loves the Internet, and memes, and everything about computers now, he has also tweeted the image with a link to the interview.

Prince’s new meme/song is just another step in his journey of e-redemption. Last year, the reclusive star joined Twitter and promptly set about taking rubbish selfies and photographing his food, like everyone else on Twitter.

Prince’s Twitter profile is littered with memes, image macros, and other bizarre Internet clutter. He seems to particularly enjoy sharing parody images of himself.

But Prince hasn’t always been a fan of the Internet. Recently, Prince filed lawsuits against 22 of his fans, intending to sue them for $1 million each. Their crime? Sharing Prince concert recordings on Blogspot. However, the lawsuit was swiftly rescinded after the files were removed.

Additionally, Prince’s longrunning war against file-sharers is the stuff of legend. His last album, 2010’s aptly named 20Ten, was given away free with newspapers around the world instead of going up for sale on iTunes. Last year, Prince even filed takedown requests with Vine after six-second snippets of his songs started appearing on the site.

Could Prince’s new meme-inspired song be the first step towards Prince embracing the Internet? We can only hope.

H/T The Verge | Photo via Prince