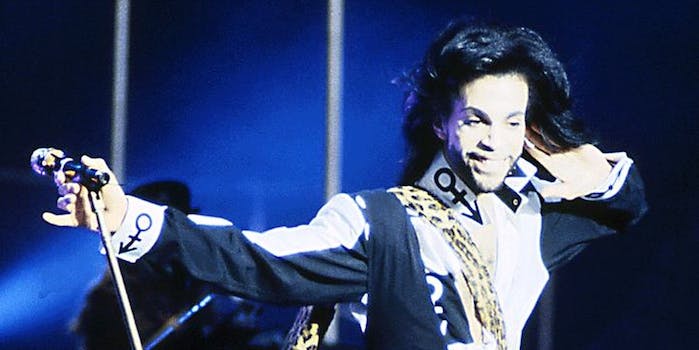 This is what it sounds like when pirates cry.

Prince, the singer/songwriter/Minnesotan sexpot, is suing 22 fans for $1 million each.

Their crime? 2 love his music 2 much. Or, as Prince sees it, running a bootlegging ring of his live performances.

In a lawsuit filed Jan. 16 and recently made available online, Prince accuses 22 Blogspot users of conspiring to create “an interconnected work of network bootleg distribution, which is able to broadly disseminate unauthorized copies of Prince’s music compositions and live performances,” according to his lawsuit. Two of them made their real names easily available online. The other 20 aren’t as easily identifiable, but eight of them have clear Blogspot or Facebook pseudonyms.

It’s indisputable is that the sites he names in his complaint are now a ghost town, and that at least some of them made finding bootlegs of his music extremely easy. Visitors to worldofbootleg.blogspot.com, for instance, are greeted with a trove of Prince setlists over the years, accompanied by since-deleted files that were hosted at Turboit and presumably included the corresponding recordings.

But there aren’t a lot of options out there for Prince fans who wants to hear past concerts. Live albums of his music aren’t available on Spotify or iTunes. You can buy a few DVDs of live concerts on Amazon, or a smattering of individual live clips from his website at $1.77 a pop, but that’s about it.

Prince has a long history of staunchly protecting his copyright, even to the detriment of his own image. The EFF, for instance, has him in their “Hall of Shame” for being among the first to issue copyright complaints against people using his music in their six-second Vine clips, and telling YouTube to take down fan videos of his live cover of Radiohead’s “Creep”—a song he doesn’t even own the copyright on.